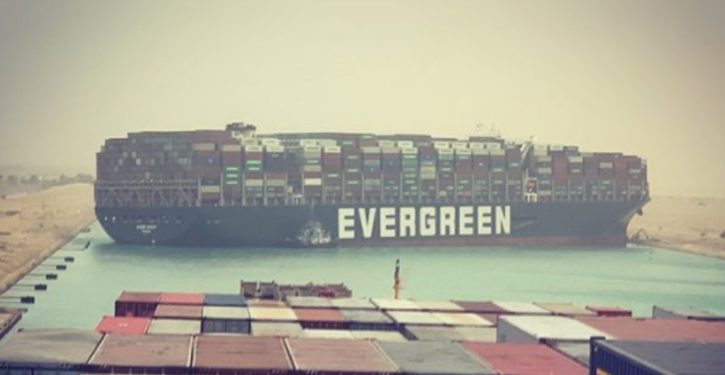 Stuck in the middle with cargo. Social media image via gCaptain

Caveat to begin with: this is information about the situation, not a prediction.  It’s about points to bear in mind.  The situation is unusual, so it merits the consideration of unusual possibilities.  But laying them out is a thinking aid, not – again – a prediction or assessment of any kind.

This will be brief and to the point, largely because there isn’t time to make it longer.

The current situation is that the ship’s bow is still stuck in the canal embankment.  Attempts to fully refloat her have been unsuccessful.  A massive dredging operation is underway now to prepare for refloating.

The opinion of an expert from the Netherlands is that Ever Given can’t be refloated without removing some of her cargo, an assessment that confirms my own fears.  The time to free the ship and clear the canal is being given as “days or weeks.”

"Berdowski told Dutch TV on Wednesday that his company had determined it was impossible to free the ship with its current cargo on board."

As I expected. Have to remove some containers to refloat ship. #EVERGIVEN https://t.co/nXFZP40sWd

Dutch and Japanese salvage companies are reportedly on the way to take over the refloating effort.

A number of people have asked me if the mishap with the M/V Ever Given, an ultra-large container vessel (UCLV), could have been engineered in some way.

I believe the answer is yes, although that is a theoretical possibility only.  See paragraph one.  There isn’t enough information publicly available to point to that as something likely or supported by any specific evidence.

Aspects of the known scenario that would be consistent with an engineered mishap include the ship’s position at the time of the mishap, in the narrowest part of the canal waterway, and the initial report of a “blackout” of some unelaborated kind on Ever Given, at the time the mishap occurred.  The “blackout” seems to refer to electronic systems, which would include steering and general navigation.

Such a blackout doesn’t make it impossible to control the ship, but the reactions of helm and propulsion could be decisively slowed for long enough to get the ship into trouble, especially in the conditions of this case; i.e., a 1,300-foot-long ship in a canal section that’s 1,000 feet wide.

Notably, although numerous original articles still include the report of a “blackout,” Business Insider indicates that the reference has since been deleted from the official statement.

The additional “explanatory” language about high winds and a sandstorm doesn’t really ring true to me, to be honest.  Ever Given has a very deep draft: 15.7 meters (about 50 feet), which is more than a Nimitz-class carrier’s draft of 11.3 m, or about 35 feet.  Moreover, Ever Given is obviously very heavily laden with her deck cargo.  She reportedly entered the canal at over 224,000 tons.  She’s not going to be scooted sideways in high winds and a low sea state, unless there is some kind of steering and/or propulsion casualty.

One other thing to know about going through the canal: a canal pilot should embark for the transit on a ship of Ever Given’s size, coming with his own independent communications to stay in touch with the canal authorities.  If some weird, rogue thing had occurred with the crew of Ever Given, I suspect we’d have a whiff of that by now.

If the mishap was engineered, I’d be looking at the blackout and potential interference from off the ship.  That wouldn’t necessarily mean an electronic intrusion just before the mishap either.  It could have been malware inserted some time ago and awakened on command, perhaps when the ship departed the anchorage at Port Suez, or even as late as in the Great Bitter Lake during the northbound transit.  A Suez canal transit would be particularly suited to such a scenario because the navigational features of the transit are so standardized and well known.

Again, this is a discussion of potential.  It is not an assessment or a prediction based on evidence.  The public doesn’t know enough for that.

Why would we even talk about this possibility?  A couple of potential reasons that exist in the current situation might be considered.

One is that the canal is now cut off to the transit of warships that might need to make rapid movements between the Mediterranean Sea and the Middle Eastern waterways.

A pair of Russian navy ships is indeed stuck in the gaggle south of the canal, it appears; one a Steregushchiy-class corvette, the other a replenishment ship.

FS Charles de Gaulle (R-91), the French carrier on her 2021 deployment, isn’t trying to go through the canal at the moment, but she recently moved from the Mediterranean to Middle Eastern waters, and was participating about a week ago with the ships of her strike group in exercises in the Arabian Sea and Gulf of Oman.  She’s in the U.S. CENTCOM theater for the duration, regardless of where France’s emerging requirements might want her – unless she takes the long way around Africa.

USS Dwight D Eisenhower (CVN-69), meanwhile, is in the Med, having just done a port visit in Souda Bay, Crete.  If the U.S. wanted to move her rapidly into CENTCOM, it couldn’t be done right now.  Eisenhower would have to transit around Africa.

USS Theodore Roosevelt (CVN-71), which has been near Western Australia in the last 10 days and conducted joint ops with the Royal Australian Navy a week ago, could head for CENTCOM at need, but that would leave Southeast Asia without a carrier presence.

Who might be gratified by such an absence?  The Chinese Communist leadership will obviously spring to mind.  Which leads to the second potential reason in this situation.

M/V Ever Given is owned by a Japanese company, Shoei Kisen KK.  She operates in the livery of Evergreen Marine, a shipping line based in Taiwan.  If Beijing wanted to impress geopolitical rivals with China’s ability to cause problems for them using subtle, unexpected asymmetric maneuvers, who would the rivals likely be?

Again, these points are thinking aids.  Nothing is proven, and I emphatically do not claim that it is.

But the overarching reason it is worth thinking these thoughts now is that if this were to be executed as an electronic/information systems attack on global infrastructure – this is what it would look like.  It wouldn’t look any different from this.  We’d all go through an initial period, probably for days, of assuming it was an accident.

It’s absolutely premature to suggest that this is an attack.  But it’s not at all premature to analyze it as a potential one.  The technology exists to bring this off, and the payoff, at crucial times, could be significant.

When I was stationed in Naples, Italy, we often experienced power outages, especially in the summer.  Even in the Navy facility where our command headquarters was located, some things were on local civilian power and would be lost during the outages.  (The elevators were some of our least-favorite among them, as we worked on the seventh deck of our building.  The 24-hour watch spaces were kept cool on industrial-capacity Navy generators, but the A/C in staff offices failed when civilian power did.  We’d have to shut down computers and on occasion couldn’t continue working, if the outage lasted long enough.  Fortunately, the loss of traffic lights on the streets near our base complex didn’t really matter, as no one paid attention to them anyway.)

When civilian power had been lost for the fourth or fifth time in a week, the sailors would get to asking themselves about asymmetric infrastructure attacks.  “If terrorists or rogue regime commandos took out our power,” they’d ponder, “how would we know it wasn’t just the Naples power company having one of its usual crummy-service outages?” (Crummy was not the actual word used.)  “How would we know it was the bad guys?”