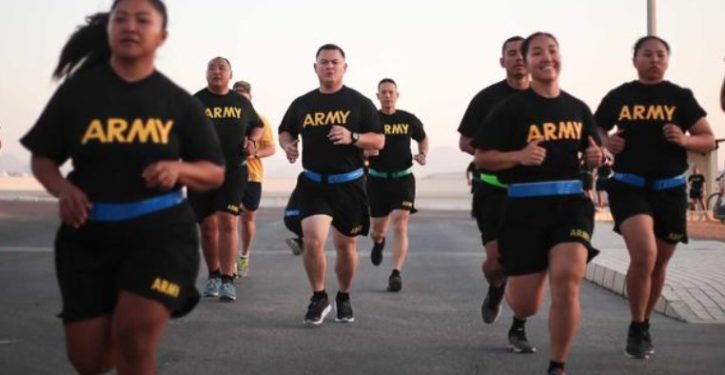 It looks like G.I. Jane can’t quite keep up with G.I. Joe.

The Army Combat Fitness Test (ACFT), which became the official standard for that branch of the military in October 2020, was supposed to be “age-blind and gender-blind” and was developed to reduce injuries and prepare soldiers for the rigors of combat. Instead, it has unintentionally yielded significant gender disparities in the pass/fail rate. While 90% of men pass the test, 65% of women are failing it. (RELATED: Ibram X. Kendi’s ‘How to Be an Antiracist’ now recommended reading for U.S. Navy)

Oh. So what they’re saying is that when there is one fitness standard, most males can achieve it but most females can’t. Interesting. Someone should mention that this is precisely why competitive sports are in two gender categories, if that’s of any interest to anyone.

But back to the ACFT.

The test includes six events: the maximum deadlift, a standing power throw, hand-release push-ups, a sprint, drag and carry, leg tuck, and a two-mile run. In order to pass, a score of at least 360 points out of a possible 600 is required. Average scores for women are currently said to be around 100 points lower.

There are concerns that this new standard is unfair because it could limit women’s ability to rise in the ranks since those who achieve higher scores are more likely to be promoted.

The disparities were apparent from the get-go, the Washington Post noted in September 2020:

Recent Army figures show that 54 percent of female soldiers failed the new Army Combat Fitness Test (ACFT), which is being rolled out on a provisional basis, compared with 7 percent of men during the second quarter of 2020.

That reflects a significant improvement over last year, when leaked data showed that over 80 percent of a smaller cohort of female test-takers failed the six-event exam. But some women fear they won’t be able to pass even with additional training or will continue to score lower than men, potentially affecting their career prospects in an institution already struggling to shed historical gender and racial disparities.

There were also already concerns from female soldiers that they wouldn’t be able to keep up with their male colleagues.

One female soldier, who like others spoke on the condition of anonymity for fear of damaging her career, said she attained high scores on the old test. But despite years of exercising to enhance her upper-body strength, including during periods of intense workouts on overseas deployments, she remains unable to do even a single pullup or leg tuck. “I can’t even start to flex” upward, she said.

The soldier, who had a baby this year, said she worries the increased emphasis on muscular strength will eventually lead her and other females to leave the military earlier than planned.

“You’re not going to have a lot of females make it to the top,” she said.

While we respect the men and women who serve in the military, clearly there are some decisions that are being made by those in leadership that deserve scrutiny.

First, reverting to gender-based scoring could drastically reduce the performance and effectiveness of combat arms units. Specifically, without a separate, minimum standard for combat arms, the requirements to join the nation’s combat forces could soon be as low as performing ten push-ups in two minutes, running two miles in twenty-one minutes, deadlifting 140 pounds three times, and performing only one repetition of a leg tuck or, failing that, two minutes of a plank exercise. Proponents of this ACFT standard will undoubtedly claim that it is an appropriate predictor of success for combat arms soldiers; as a recent infantry company commander, I can promise you it is not. While these low standards may have seemed adequate in a controlled study, I know from experience that they will not suffice in reality…

…While it may be difficult for a 120-pound woman to lift or drag 250 pounds, the Army cannot artificially absolve women of that responsibility; it may still exist on the battlefield. The entire purpose of creating a gender-neutral test was to acknowledge the reality that each job has objective physical standards to which all soldiers should be held, regardless of gender. The intent was not to ensure that women and men will have an equal likelihood of meeting those standards. Rather, it is incumbent upon women who volunteer for the combat arms profession to ensure they are fully capable and qualified for it. To not require women to meet equal standards in combat arms will not only undermine their credibility, but also place those women, their teammates, and the mission at risk.

This is all happening in the midst of the pearl-clutching by the military over recent comments by Fox News host Tucker Carlson criticizing their priorities by highlighting President Biden’s praise of “maternity flight suits” and relaxing hairstyle regulations. Sen. Ted Cruz (R-Texas) has requested a meeting with military brass for their coordinated social media attack on a private citizen.

The job of the military is quite simple — be a deterrent for war, but if you have to fight, make sure you win.

Maj. Gen. Lonnie Hibbard, general of the Army’s Center for Initial Military Training (CIMT), which designed the ACFT said, “Combat is age and gender-neutral and so regardless of your gender or, more importantly, your [military profession], we have to ensure that everybody is prepared for combat.”

He’s right. Fitness standards are there to keep our military service members safe, not pave a career path.

We need to keep the focus where it needs to be.

A ‘mess’ Biden inherited from Trump just got far messier
Next Post
Don Lemon: To end racism in America, we must teach that Jesus was not white