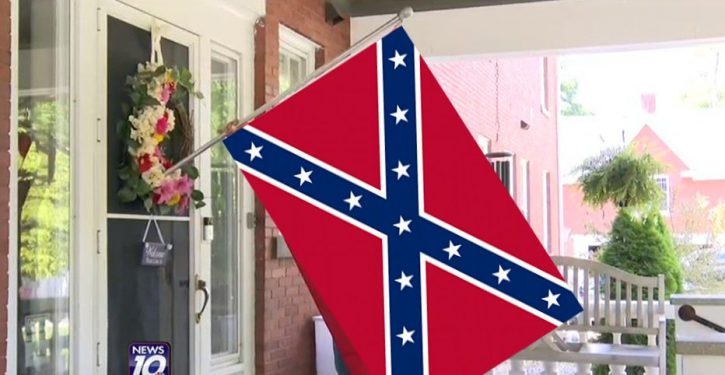 Three professors have been wrongly suspended over Halloween costumes they wore over six years ago. One of them is being investigated for having dressed as a Confederate general. As the College Fix notes:

Three University of South Alabama professors have been placed on administrative leave over Halloween costumes they wore and posed with at an on-campus party in 2014, the campus has announced. “The faculty members involved have been placed on administrative leave pending the outcome of the investigation and any related proceedings,” university President Tony Waldrop said in a March 5 statement.

The photos show “then-Mitchell College of Business dean Bob Wood dressed as a Confederate general and professors Alex Sharland and Teresa Weldy posing with a whip and a noose,” WKRG5 reports. … Wood and Sharland, who have tenure, have apologized, while Weldy, who is not tenured, “chose not to apologize.”… Waldrop upped his efforts on the nearly 7-year-old matter, calling the costumes and poses “offensive” and “contrary to our core principles of diversity and inclusion.” He pledged in his statement that the university will “address this situation in a manner that demonstrates our unwavering commitment to diversity, inclusion, and a safe and welcoming environment for every member of our community…. the University has engaged the services of an independent, highly qualified external attorney to investigate this matter … pursuant to the University’s policies of non-discrimination and equal opportunity/equal access.”

Halloween costumes have long been a point of contention on college campuses in the era of cultural sensitivity, microaggressions, and cancel culture.

Historical depictions, such as dressing in military garb, are protected by the First Amendment even if they offend people on campus. For example, a history professor had the right to place a photo of himself with a Roman-style sword in a campus display case, even though it offended campus feminists who viewed it as threatening, according to the 8th Circuit Court of Appeals. (See Burnham v. Ianni (1998)).

Wearing a Halloween costume is not an endorsement of the character depicted in the costume or that character’s beliefs. The whole point of a Halloween costume is to be scary or eye-catching. A person who wears a costume of Jack the Ripper is not thereby endorsing or threatening to commit murder. Similarly, a person who dresses as a confederate or carries a whip or a noose on Halloween is not endorsing the revival of slavery or lynching, or the revival of the Confederacy.

The fact that some viewers may have been offended by these costumes did not give the university the right to suspend the professors. For example, an appeals court ruled that a university could not punish a professor for writings that denigrated black people, even though his writings drew a very hostile response from some students (See Levin v. Harleston (1992)).

In Thompson v. Board of Education of Chicago (1989), a federal judge ruled that a teacher’s remarks in a news article about problems in the Chicago school system (such as gang activity) were protected by the First Amendment, even though some minority parents and teachers perceived them as racist and inflammatory. Similarly, a federal appeals court ruled that a professor could teach that Zionism was racism, even though his stance was perceived by some as bigoted and resulted in “growing furor” against him, in Dube v. State University of New York (1990).

But these tenured professors likely have due process claims if they are fired, or are disciplined for “racial harassment.”  The university president cited the university’s “policies of non-discrimination and equal opportunity/equal access,” suggesting that they are being investigated for racial harassment. But merely wearing a costume does not constitute racial harassment against students or employees.

Courts have ruled that far more offensive behavior does not rise to the level of illegal racial harassment, such as occasional use of the N-word by co-workers that is overheard or witnessed by the complainant. (See, e.g., Bolden v. PRC (1994); Witt v. Roadway Express (1998)).

As the Supreme Court has explained, the “mere utterance of an … epithet which engenders offensive feelings in a employee,” such as the N-word, is insufficient to constitute racial harassment when it only occurs once.  (See Meritor Savings Bank v. Vinson (1986)).

In light of these court rulings, a college professor would not be on notice that wearing a confederate uniform violates a college’s racial harassment policy. So a state college cannot suspend or fire a professor for wearing such costumes to a Halloween party, without violating due process and principles of fair notice. Professors can’t be disciplined if they didn’t receive fair notice that their expression was forbidden. For example, an appeals court overturned the discipline of a professor for a series of classroom lectures deemed sexually insensitive. It did so because he wasn’t on notice that his remarks — which weren’t aimed at any particular student — would be deemed to fall within the “nebulous outer reaches” of his college’s sexual harassment policy. (See Cohen v. San Bernardino Valley College (1996)).

If “people of common intelligence” wouldn’t have known that such costumes were forbidden, then punishing an instructor for them “violates due process,” even apart from the First Amendment, as judges explained in Bradley v. University of Pittsburgh, 910 F.2d 1172, 1177 (3d Cir. 1990).

Which cabinet member did Biden refer to as ‘the guy who runs that outfit over there’?
Next Post
Joe Manchin threatens to block climate bill unless Republicans have a seat