This is truly hard to watch. It is a video of the president of the United States struggling mightily to deliver remarks on the vote by the Senate to approve his pork-laden $1.9 trillion “COVID relief” package, which now in its modified form heads back to the House for final congressional approval.

Biden tries to explain the Covid bill. This moron is President? Wow. ?? pic.twitter.com/s4KA6lCidQ

Although it’s difficult to imagine how the situation could be any worse, it is entirely possible that Biden was reading a prepared script. And not just off a teleprompter, if we can believe Trump political adviser Stephen Miller, but a large-screen TV monitor.

Miller was a guest on Sean Hannity’s show on the Fox News Channel on Friday where he asserted that Biden reads off a “jumbotron,” which is one of the reasons he is refusing to commit to a date for his first address to the joint chambers of Congress.

Why is it that we’re in March, and Joe Biden hasn’t done that yet? I think one of the reasons is actually deceptively simple. If you look at Joe Biden’s campaign speeches, he often read from a giant jumbotron, not the normal teleprompters that most politicians would use.

While there was plenty of denial by the media during the campaign that Biden was using a teleprompter, never mind a jumbotron, the following video from mid-October raises serious questions about those media claims.

Regardless of whether he was reading or just winging it, Biden’s performance in the video should alarm every American. 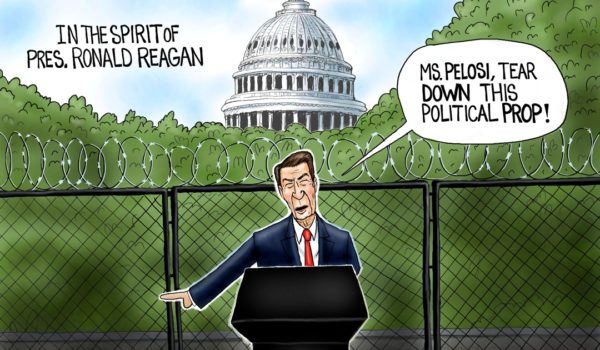 Cartoon of the Day: The enemy within
Next Post
Court denies child custody to anti-mask, lockdown-protesting father