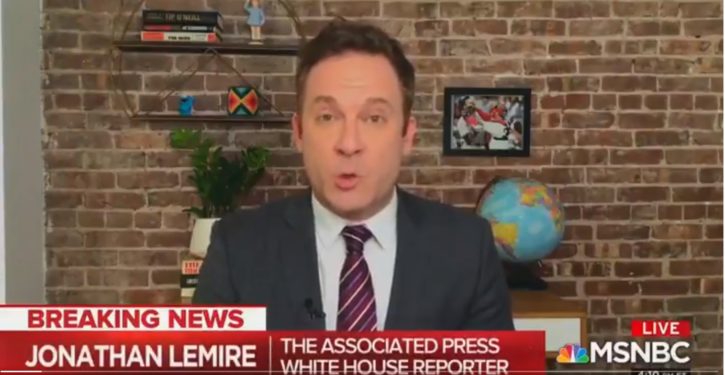 There’s media gaslighting and then there’s MEDIA GASLIGHTING. This is the latter.

As the murder trial of George Floyd’s alleged killer is set to begin on Monday, and Washington, D.C. survived threats of violence on March 4 from an unnamed “militia group,” the media (D) are sticking to their claim that the George Floyd protests/riots were “mostly peaceful,” while the “attempted insurrection” on Jan. 6 was far worse.

In a segment on MSNBC on Thursday, Johnathan Lemire, White House reporter for the Associated Press, was part of a panel on Nicole Wallace’s show “Deadline: White House.” In the excerpt below, he contrasts the make-up of the crowds during the George Floyd riots and how they were not a threat compared against the Trump supporters who showed up in D.C. on Jan. 6.

“These were nonviolent protesters, racially mixed, a lot of young people … There was no violence there." pic.twitter.com/swRhZI3jp4

Among those killed as protests over the death of George Floyd have roiled American cities in the past week are a retired police captain, a beloved owner of a barbecue restaurant, and a former star football player known as “Mr. Indianapolis.”

As of Monday, an informal tally shows 17 people have died in incidents stemming from the unrest following Floyd’s May 25 death — though details in some of the cases remain murky. …

… Many of the people killed were black, compounding the tragedy for black communities. [Emphasis added]

So George Floyd died on May 25 and by June 8, the death toll from the protests against police brutality was 17. Is that still “peaceful”? Keep in mind, this doesn’t include the charred body found in the Minneapolis pawn shop that was burned down, several others that were killed after June 8, and the number of people injured during these events.

As for D.C., it’s been widely reported that five people died during the Jan. 6 rally-turned-riot. Here’s the 411 on that:

As for the other three deaths, they were due to undisclosed “medical emergencies” not violence during the riot. Via  WSB-TV 2 Atlanta:

… Benjamin Phillips, 50, from Greentown, Pennsylvania and Kevin Greeson, 55, from Athens, Alabama died from medical emergencies, police said. It was not immediately clear how they died.

“They were on the grounds of the Capitol when they experienced the medical emergency,” Contee said.

No one was burned to death, and the only person shot was Babbitt. And the shooter was a member of law enforcement. But to the AP’s Lemire, it somehow makes sense to put up razor wire around government buildings in D.C. because four people died from medical emergencies.

Shouldn’t ‘peaceful protesters’ in Minneapolis wait for a verdict before burning down the city again?
Next Post
Cartoon of the Day: Vive la révolucion