California Democratic Rep. Eric Swalwell filed a federal lawsuit Thursday against former President Donald Trump and several allies, alleging they were “responsible for the injury and destruction” of the Capitol riot on Jan. 6.

Donald Trump Jr., Rudy Giuliani and Alabama Republican Rep. Mo Brooks are also named in the lawsuit, all of whom spoke to a crowd of Trump supporters just hours before hundreds stormed the Capitol. The suit was filed in the U.S. District Court in Washington, D.C.

“As a direct and foreseeable consequence of the Defendants’ false and incendiary allegations of fraud and theft, and in direct response to the Defendants’ express calls for violence at the rally, a violent mob attacked the U.S. Capitol,” the suit says, adding that “by force, intimidation, or threat, agreed and conspired with one another to undertake a course of action to prevent” President Joe Biden’s electoral victory from being certified.

The suit seeks unspecified monetary damages and a requirement that both Trump and Brooks give written notice at least one week ahead of any rally or public event on an election day.

Swalwell, who served as one of the House impeachment managers during Trump’s second trial, is not the first lawmaker to sue the former president over his actions in January. Mississippi Democratic Rep. Bennie Thompson, alongside the NAACP, sued Trump on Feb. 16, alleging that his inciting the Capitol riot violated the 1871 Klu Klux Klan Act by attempting to force Congress from doing its job to certify the election.

Trump is also under criminal investigation in Georgia, where the Fulton County district attorney is investigating whether his failed attempts to overturn Biden’s narrow victory amounted to election fraud.

He is also under investigation in New York, where Cyrus Vance, the U.S. attorney for the city’s Southern District, is looking into his past business dealings. 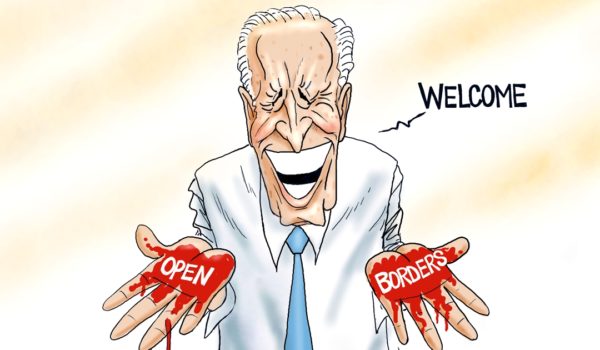 Cartoon of the Day: Red-handed
Next Post
Flashback: To sell Obamacare to GOP, Chuck Schumer extolled virtues of which non-PC author?