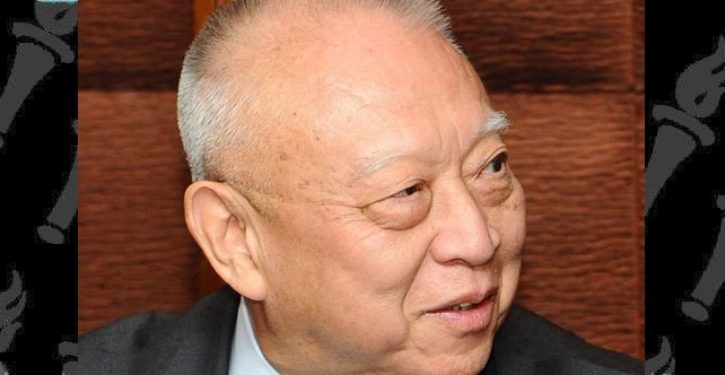 The founder of a front group for the Chinese Communist Party appeared at an event at the Carnegie Endowment for International Peace in May 2016, where he pushed a pro-Beijing argument regarding a decades-long stalemate over control of the South China Sea.

The speech, by Tung Chee-hwa, the founding chairman of the China-U.S. Exchange Foundation (CUSEF), was held more than 14 months after William Burns, President Joe Biden’s nominee for CIA director, took over as president of the Carnegie Endowment.

The timing of Tung’s visit to Carnegie would appear to conflict with Burns’s testimony before the Senate Intelligence Committee on Wednesday that he cut ties between Carnegie and CUSEF “not long after” he took over as president of Carnegie in March 2015.

Tung, a billionaire who was formerly chief executive of Hong Kong, gave a speech at Carnegie’s headquarters in Washington, D.C. on May 11, 2016. The Daily Caller News Foundation has reported that CUSEF donated between $200,000 and $500,000 to Carnegie between 2015 and 2017.

During his Wednesday testimony, Burns downplayed Carnegie’s relationship with CUSEF, while acknowledging that the Hong Kong-based group was used by the Chinese Communist Party (CCP) “to sway public opinion and build influence.” (RELATED: CIA Nominee Says He Cut Ties With Chinese Propaganda Group As President Of Think Tank)

He also acknowledged in response to written questions released before the confirmation hearing that the CCP uses CUSEF as part of a “whole-of-government approach … to try and influence political, economic, and cultural developments to benefit CCP interests.”

Burns told Sen. Marco Rubio, who cited details reported this month by the DCNF, that he severed ties with CUSEF because he was “increasingly worried about the expansion of Chinese influence operations.”

He said that Carnegie subsequently launched an initiative to counter foreign influence operations, which focused on China and Russia.

Whether Tung’s speech was coordinated with China is unknown, but he pushed an overtly pro-Beijing viewpoint during his speech at Carnegie, one of the most influential foreign policy think tanks in the world.

Tung spoke at length about the South China Sea, a geopolitical hotspot that has long been the center of a territorial dispute involving China, Taiwan, Vietnam and other Asian countries. At the time, an international arbitration court in The Hague was deliberating rightful ownership of islands in the South China Sea.

The Chinese government waged a massive propaganda campaign in the West ahead of the arbitration court’s decision, with Reuters and CNBC reporting in July 2016 that Beijing was in “propaganda overdrive.”

Tung’s speech at Carnegie Endowment was held off the record, according to a notice at Carnegie’s website. Douglas Paal, a vice president at Carnegie, led a moderated discussion after the speech.

According to a transcript of Tung’s prepared remarks posted at CUSEF’s website, he called for peaceful dialogue between the U.S. and China and portrayed China as a non-aggressor in the South China Sea.

“I hope, from the above, you can appreciate that China’s activities in the South China Sea have not been aggressive, nor assertive, but rather has been restrained, and aimed at promoting peace and common prosperity,” read Tung’s prepared remarks.

Tung asserted that Vietnam and the Philippines had acted “aggressively” throughout the decades-long standoff, while China has “urged restraint.” He also asserted that international treaties provided “definitive evidence supporting the legal position” that the Spratly Islands, which are at the center of the dispute, “actually belong to China.”

He also praised the Chinese government’s leaders, and asserted that China was “modernizing her military is to act as a deterrent to foreign aggression against China.”

The arbitration court in The Hague ruled against Beijing and for the Philippines in a decision on July 12, 2016. The court rebuked China’s claim that it had a historical right to islands in the South China Sea. The Hague tribunal also said that China had caused “irreparable harm” to marine life, while putting ships from the Philippines in danger.

It is unclear if Burns attended Tung’s speech. It is also unclear when Burns began cutting ties with CUSEF while at Carnegie, though the think tank maintained links to the Chinese group for at least two years after Burns took over as president.

Carnegie’s biography for Tung notes that he is founding chairman of CUSEF and vice chairman of the Chinese People’s Political Consultative Conference, an advisory board for the People’s Republic of China which is considered a central hub in the Communist Party’s United Front system.

In May 2017, Tung visited the Carnegie-Tsinghua Center, which is Carnegie’s outpost in Beijing.

Chinese finance executive Zhang Yichin, who also serves on the Chinese People’s Political Consultative Conference, joined Carnegie as a trustee in October 2016. Yichin also gave between $750,000 and $1.5 million to Carnegie beginning in 2016. Burns praised Zhang’s position on the board in a statement in 2016.

Overall, Burns was highly critical of the Chinese government during his testimony Wednesday, and agreed with Republicans that CUSEF functions as an influence agent for the Chinese Communist Party. He called the Chinese government an “adversarial authoritarian” that has strengthened its capabilities “to steal intellectual property, repress its own people, bully its neighbors, expand its global reach, and build influence in American society.”

He also said that CCP diversifies its influence efforts by mobilizing and directing the activities of businesses, non-government organizations and members of the Chinese expatriate community to “transmit their views in multiple channels.”

A spokesperson for Carnegie reiterated Burns’s remarks at Wednesday’s hearing, but did not address questions about when the think tank decided to cut ties with CUSEF.

“As Ambassador Burns noted in yesterday’s hearing, he inherited the engagement with CUSEF and ended it not long after he assumed his role as president of the Carnegie Endowment,” the spokesperson said.

Under House COVID relief bill, federal workers stay home and get paid $1,400 a week
Next Post
Do innocent black lives matter to the media?