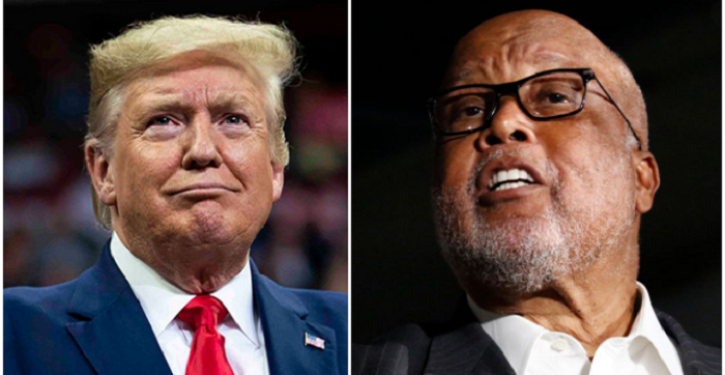 Impeachment 2.0 may have ended with another failure by the Democrats to convict Donald Trump of high crimes and misdemeanors, but that doesn’t mean they won’t continue to dog with criminal actions. Rep. Bennie Thompson, chairman of the House Homeland Security Committee, has already cast the first stone. Thompson has  filed a federal lawsuit against Trump for his alleged role in inciting a riot at the Capitol on January 6. The Mississippi lawmaker claims Trump conspired with attorney Rudy Giuliani and extremist groups to stop Congress from certifying President Biden’s Electoral College win, which in turn led to violence.

The suit accuses Trump of violating the 1871 Ku Klux Klan Act which prohibits the use of violence or intimidation to prevent members of Congress or other federal officials from carrying out their constitutional duties.

“January 6th was one of the most shameful days in our country’s history, and it was instigated by the president himself,” Thompson said in a statement. “His gleeful support of violent white supremacists led to a breach of the Capitol that put my life, and that of my colleagues, in grave danger. It is by the slimmest of luck that the outcome was not deadlier.”

New: Rep. Bennie Thompson filed a lawsuit in federal court today against Trump, Giuliani, the Proud Boys, and the Oath Keepers alleging they conspired to interfere with Congress's certification of the election, in violation of the Ku Klux Klan Act https://t.co/suhMsNVyii pic.twitter.com/BIuEAMB0PH

The Associated Press reports that Thompson’s lawsuit is the first “of an expected wave of litigation over the Jan. 6 riot.”

A clear indication that, even though Donald Trump is no longer in office, the Democratic party has no intention of working to make the lives of the American people better and will continue to instead focus on the former president.

Jason Miller, a Trump adviser, dismissed the allegations made in the lawsuit, pointing out that Trump had no role in organizing the rally. He “did not incite or conspire to incite any violence at the Capitol on Jan. 6th,” Miller succinctly explained. adding, “President Trump has been acquitted in the Democrats’ latest impeachment witch hunt, and the facts are irrefutable.”

No Basis in Reality

Thompson’s lawsuit riot has little basis in reality, as there has been absolutely no proof that the rally and march in early January were inspired or motivated by white supremacy. The problem is that Democrats claim all Trump supporters are white supremacists and thus, in their minds, that must have been the motivating factor. It is simply unimaginable to them that the riots had anything to do with opposition to counting the electoral votes in what many staunchly believe, right or wrong, was a stolen election.

Challenging the electoral vote count, incidentally, is something Democrats have done over and over, both in 2017 and 2005. Where were the lawsuits back then against Democrats? Weren’t the Democrats, by this standard,  trying to prevent members of Congress from carrying out their constitutional duties and disenfranchising black supporters of Donald Trump and George W. Bush?

These actions were practically inspired by Senate Minority Leader Mitch McConnell (R-Ky.), who in a post-impeachment tirade, suggested the former president “didn’t get away with anything, yet. We have a criminal justice system in this country. We have civil litigation.”

Cartoon of the Day: Frozen New Deal
Next Post
Petition to impeach Cuomo gets 18,000 signatures in 3 days: NY assemblyman