It’s hardly news when White House Press Secretary Jen Psaki is snide or testy in exchanges with the media, especially when they are from Fox News and ask questions unrelated to ice cream flavors of colors. The latest clash was with Fox News Radio reporter Rachel Sutherland, who asked about about Joe Biden’s executive order mandating that children be permitted “to learn without worrying about whether they will be denied access to the restroom, the locker room, or school sports.” (RELATED: Jen Psaki refuses to say if Biden prioritizes teachers or students in school reopening)

“Does the administration have guidance for schools and dealing with disputes arising over trans girls competing against and with cis girls?” Sutherland asked.

Psaki replied, “I’m not sure what your question is.”

When Sutherland began to clarify the question she had just asked, Psaki interjected again, “I’m familiar with the order, but what was your question about it?”

“The question is, does the president have a message for local school officials in dealing with these kinds of disputes that are already starting to arise between trans girls who are competing against cis girls,” the reporter asked, noting that these sporting events lead to scholarships.

“I would just say that the president’s belief is that trans rights are human rights, and that’s why he signed that executive order,” Psaki shot back without ever really answering the question.

"Does the president have a message for local school officials in dealing with these disputes that are already starting to arise between trans girls who are competing and cis girls and a level playing field…?"@PressSec: "Trans rights are human rights." pic.twitter.com/RJuwfxotoD

Psaki isn’t just putting words in Biden’s mouth when she dismisses the rights of girls to compete on a level playing field in sports at the expense of catering to biological males who self-identify as females.

Miguel Cardona, President Biden’s nominee for Education Secretary, has also repeatedly defended allowing biological males to compete in girls’ sports. Cardona replied to questioning by Senator Rand Paul about boys competing in girls’ sports by saying, “I believe schools should offer the opportunity for students to engage in extracurricular activities, even if they’re transgender.”

The exchange prompted Paul to suggest the Biden administration’s belief would leave most Americans wondering “what planet are you from?”

Not the First Time Psaki Has Dismissed Fox News Reporters

Psaki’s flippant response is just another in a long line showing this administration’s disdain for Fox News reporters. Earlier this week, the White House press secretary took a shot at reporter Peter Doocy, who challenged her over the 11,000 jobs that were lost after the president canceled the Keystone XL pipeline.

“When is it that the Biden administration is going to let the thousands of fossil fuel industry workers … who are either out of work or will soon be out of work because of Biden’s EO, when it is and where it is that they can go for their green jobs?” Doocy asked.

“Well, I’d certainly welcome you to present your data of all the thousands and thousands of people who won’t be getting green jobs,” Psaki sarcastically replied. “Maybe next time you’re here you can present that.”

Fox News's Peter Doocy is back and he's brought the receipts on energy to Jen Psaki.

Needless to say, she didn't like that he pressed her on what's the plan for laid off workers to get these fantastical "green" jobs that Biden and Kerry keep talking about (1/2) pic.twitter.com/czz45M9tXK

Last month, when Doocy noted that Biden may have been setting a bad example by going maskless on federal property after signing an executive order requiring it, Psaki again failed to hide her disdain for questions that challenge her.

“I think we have bigger issues to worry about at this moment in time,” she replied.

Biden himself disparaged the Fox News reporter when he had the gall to ask about a recent conversation with the Russian president: “What did you talk to Vladimir Putin about?”

“You,” Biden napped back sardonically. “He sends his best.”

As Ben Bowles noted at the time, ”

It was a legitimate question about” Biden’s “first foray into relations with one of the nation’s most fearsome adversaries. It deserved a legitimate answer.”

The question is where is the media outrage over their treatment of the network? You know, the same media that were repeatedly distraught over how former President Trump treated them?

62% say third political party is needed in U.S.
Next Post
Cartoon of the Day: Say it ain’t so, Joe 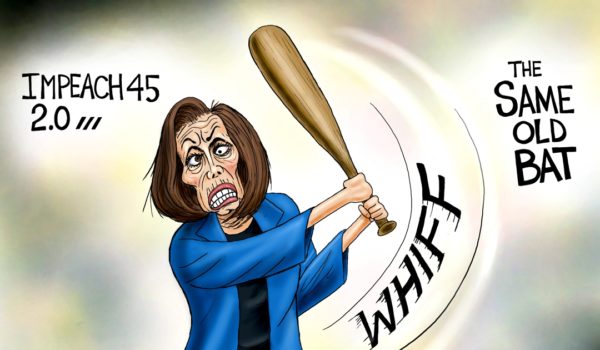