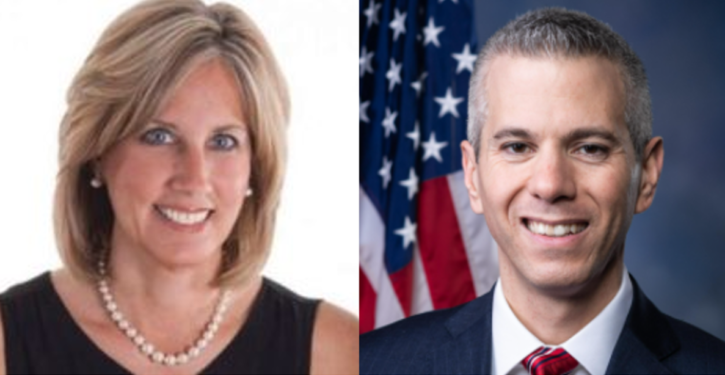 It seems like we were just talking about this.  The Congressional race in New York’s District 22 is the one between incumbent Democrat Anthony Brindisi and Republican Claudia Tenney, in which Tenney declared victory based on a final 109-vote margin in her favor.

Perkins Coie lawyer Marc Elias, with his extensive background in Soros-backed voting litigation (see here as well), represented Brindisi in court proceedings incident to the 2020 race.  A week ago Monday (1 February), he filed a motion for Brindisi alleging that Dominion voting systems had systematically undercounted the vote for his client and requesting an order to show cause why a hand recount should not be done.  (On 29 January, the state supreme court had lifted an injunction that prevented the county election boards from certifying the election.  Brindisi wanted to stop that process by having the order to show cause intervene, and leave the door open for his recount.  See p. 1, also p. “2 of 12.”)

On Friday, as reported at The Hill, a judge of the state supreme court denied the request for an order to show cause.  In my earlier article, I observed that Elias did not ask for any inspection or audit of Dominion machines, in spite of alleging that they had undercounted votes for Brindisi.  His motion requested only that the court support Brindisi’s desire for a hand recount.  The court denied the request that the counties be given an order to show cause.

Brindisi first filed a notice of appeal after the Friday ruling, according to local news.  But now Brindisi has conceded, rather than going through with an appeal of the judge’s decision.  (He might have grounds for an appeal, in light of the narrowness of the victory margin for Tenney, and the claim of a systematic vote undercount.)

In retrospect, this whole episode was an interesting move.  It is interesting that this challenge was made in New York.  There were more than 326,000 votes cast in the district; a margin of 109, or 0.03%, is extraordinarily thin.  It might have been possible to appeal successfully for a recount based on the margin, although it doesn’t appear that margin triggers an automatic recount under New York law.

But a discrepancy identified with the vote total, like the undercount discrepancy alleged in the Elias filing, can automatically trigger a recount.

Separately, “New York requires a manual audit of at least 3% of each type of voting machine no later than fifteen days after a general or special election.”  Such audits are done by law and reported by the county election officials.  If the county officials don’t identify anomalies – which, if identified, could trigger a mandatory recount – a recount on that basis is unlikely.

The Elias motion set up the potential for a recount by observing that there were discrepancies in the vote audits of two counties, and suggesting that the other counties might show similar discrepancies.  The motion cites a report of discrepancies from only one county (Oneida County):

The audit reports provided by Oneida County explicitly noted that the audit results revealed “unexplained discrepancies” but failed to provide any explanation, in the report or otherwise, what caused those discrepancies or if they were ever resolved.  (See p. 6, also “7 of 12”)

The motion doesn’t document discrepancies in other counties, or propose to go back for a do-over of the routine audit.  In that regard, it was a good bet that Brindisi could rely on the court not to conclude that another audit of the machines was necessary.

In any case, in his ruling on Friday, the state supreme court judge had this to say: “This Court also does not have the authority – regardless of the seriousness of the problems in this election – to order the Boards of Elections to conduct a recount …” (see p. 5, also labeled “6 of 9”).

Technically, of course, that’s not what an order to show cause would be.  It might amount to that, if the county boards couldn’t think of a good excuse (i.e., if they couldn’t “show cause” why they should be able to certify the election and not have to oblige Mr. Brindisi with a recount).

It is also interesting that Elias didn’t appear personally for argument (according to the ruling).  The judge, meanwhile, wrote as if an order to show cause – which the court should have the authority to issue – were tantamount to an order to hold a recount.

Again, the appeal was denied, Brindisi has conceded, and it appears the matter is dropped.  What’s left is the paper trail in the New York courts, with no conclusion to shed a prejudicial light on it if someone wants to refer to it later, as an example of a Democrat facing voting-machine counting errors.

The sentence is uninformative and rather dismissive; the appearance is that the court went with the reports of the county boards and did not inquire further, nor did it refer to any special argument made before it for the machine-discrepancies problem alleged in Elias’s motion for Brindisi.

The Elias motion comes off basically as a sacrifice fly.  It’s fair to suggest that if the matter had been pursued, someone would have demanded an inspection of the Dominion machines.  The outcome of that might have been inconvenient for the “nothing to see here” narrative.  We won’t know one way or the other from this case, because the allegation has been recorded, the court has ruled – based on other considerations – and the matter has been dropped, forestalling further probing down this alley.  But, of course, the documentation never goes away.