Miss Trump yet? CNN does, whether they know it or not. The network saw its ratings crater by 44% in the first week of the Biden administration, something Variety says “may offer a portent of what the post-Trump era will be like for the network.”

Primetime numbers for the pro-Biden network steadily declined throughout January from record highs but dropped significantly more than other networks during the final week.

Viewership data across two key metrics — the target news demographic for people ages 25-54, and the total audience watching — shows that CNN ended the final week of January with ratings dropping roughly 44% for total audience … across all three hours of primetime.

MSNBC actually fared the best of the big three cable news networks in the final week of January, edging out Fox News. Tucker Carlon’s FNC show, according to the numbers, was the only program across all three networks in primetime to maintain the same level of viewership during Biden’s first week and remained relatively steady throughout January.

CNN reacted to its ratings debacle pretty much as you would expect – obsessing over Fox News.

Media gatekeeper and Fox stalker Brian Stelter published a piece in which he exclusively focused his attention on the ratings over at the rival network. “Instead of competing by promoting correspondents and putting news coverage front and center, the network prioritized ever more outrageous, ever more extreme opinion, he wrote. “‘Tucker Carlson Tonight’ essentially expanded to ‘Tucker Carlson Day and Night.’”

Yes, he said that with a straight face.

Carlson, whose show is the current gold standard in media broadcasting, is what hampered Fox News according to Stelter. And the pudgy anchor said that even with this handy chart from Variety at his disposal. As you peruse it, guess who appears on Fox at 8 p.m. 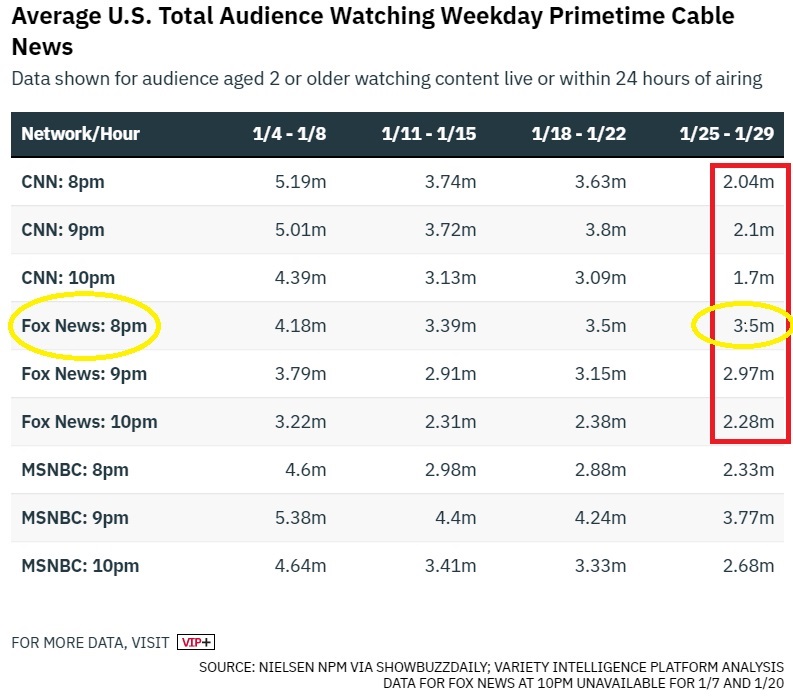 Remarkably, Stelter goes on to suggest that Fox News’s ratings struggles are the fault of former President Donald Trump.

“Is this Trump’s fault?” he opined, asking a question that likely runs through his head every morning, noon, and night.

“President Trump helped the network in the short term — but ultimately the network hurt Trump and he wounded them too,” Stelter added. “‘Never before had a network been so closely affiliated with a commander in chief,’ WaPo’s Sarah Ellison and Jeremy Barr wrote Tuesday.”

And yet, here you have some evidence suggesting CNN’s ratings were more closely affiliated with Trump than any other network.

Ed Morrisey of Hot Air writes, “Fox News’ ratings have barely budged, although they had a bit of a drop last year. The interest lost looks somewhat more particularized, as though a great many people care a lot less about CNN and MSNBC analytical programming after the departure of Trump.”

How anybody cares about the meandering thoughts of self-absorbed resistance warriors like Stelter, Jake Tapper, and Chris Cuomo is a mystery.

But one thing is certain – a lot fewer people care what they have to think now that they don’t have Trump to whine about.