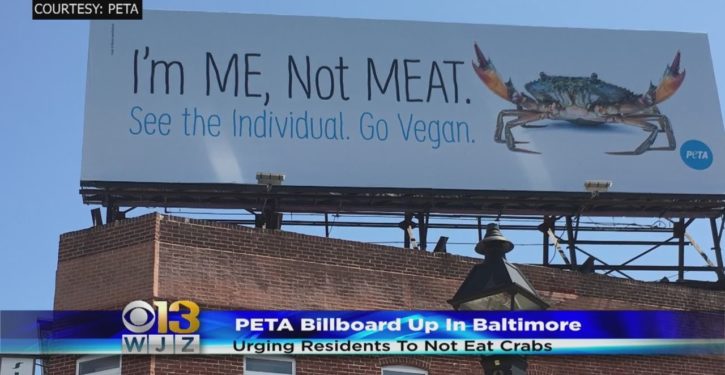 It seems as if it’s been eons since PETA appeared in the headlines, though when they did appear it was always to communicate an important milestone in on the road to treating animals more like humans. In 2018, for example, the activist group lobbied successfully to get Nabisco to change the design of its packaging for animal crackers so that the little beasties no longer appeared in circus cages, which are reminiscent of slavery. (RELATED: PETA hopes to build memorial where lobsters died in Maine crash)

Now PETA is not only back in the news but woke. Their latest campaign is to stamp out speciesism, the presumption by humans that they are superior to animals. As PETA sees it, this -ism is another form of supremacy, and part of the solution — as with other forms of supremacy — is to use more “inclusive” language.

Words can create a more inclusive world, or perpetuate oppression.

Calling someone an animal as an insult reinforces the myth that humans are superior to other animals & justified in violating them.

Stand up for justice by rejecting supremacist language. pic.twitter.com/HFmMWDcc5A

Naturally the animals in question are not the ones offended by these terms since they lack the capacity to communicate in English or any other human language, but PETA also objects on the grounds of inaccuracy. “Pigs,” they note in another tweet, “are intelligent, lead complex social lives, and show empathy for other pigs in distress. Snakes are clever, have family relationships, and prefer to associate with their relatives.”

Joy Behar’s modest proposal in re school controversy: Just have everyone repeat the year
Next Post
They stormed the Capitol to overturn an election they failed to vote in