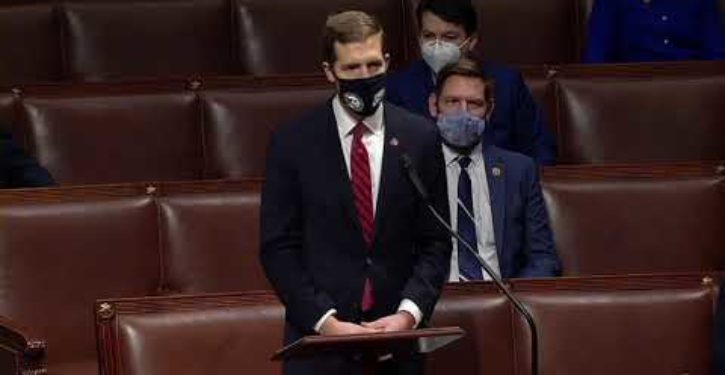 Two House members nearly came to blows and had to be separated by a Capitol staffer after several lawmakers had preached about coming together as Americans.

Reporters in attendance, according to Fox News, suggest Pennsylvania Democratic Rep. Conor Lamb’s characterization of the violence earlier in the day may have prompted the scuffle.

“It didn’t materialize out of nowhere,” Lamb said of the violence at the Capitol the previous day. “It was inspired by lies. The same lies that you’re hearing in this room tonight.”

Republicans objected, to which Lamb responded, “The truth hurts!”

C-SPAN video captured Lamb speaking and a commotion behind him.

Harris is a 63-year-old U.S. Navy veteran while Allred is a 37-year-old former college football player at Baylor.

A shouting match occurred between Representatives Andy Harris (R-Md.) and Colin Allred (D-Texas). The Representatives approached each other in the House Chamber's aisle, causing several house members to clear the benches. No punches were thrown. pic.twitter.com/63iKW079VM

Remarkably, this near-fight took place late into the night where lawmakers spent countless minutes preaching to the American people about unity and coming together.

After witnessing the violence at the Capitol, numerous Republicans backed down from contesting the election and defending the Constitution as some sort of olive branch to Democrats who have been fomenting discord for months.

Republican Sens. Steve Daines and James Lankford, CNN notes, said: “We must stand together as Americans. We must defend our Constitution and the rule of law.”

Yet Lamb accused lawmakers in the chamber of being liars for defending the Constitution. That doesn’t sound like coming together.

6. Democrats got on feet, from other side of the chamber many (a dozen?) started moving quickly, almost running thru rows to where Harris was.
7. Republicans started doing same.
8. A staffer – it may have been the Sgt. at Arms moved even more quickly to separate them.

House Republican minority leader Kevin McCarthy received a standing ovation for a speech that stated that while Democrats and Republicans might not agree on everything, “now is the moment to show America that we work best together.”

“Mobs don’t rule America. Laws rule America,” he added. “It was true when our cities were burning this summer and it is true now.”

And to symbolize that ‘unity,’ Mass Live reports, “the comment got loud applause from Republicans. Democrats in the chamber sat silently.” Just as they did for years’ worth of State of the Union speeches when President Trump repeatedly urged unity between the two parties.

The New York Times revealed that after President-elect Joe Biden’s victory had been certified by lawmakers, the Senate chaplain delivered “a powerful prayer calling for unity.”

“Use us to bring healing and unity to our hurting and divided nation and world,” chaplain Barry C. Black said. “Thank you for what you have blessed our lawmakers to accomplish in spite of threats to liberty.”

What a great example Lamb, Allred, and Harris have set.