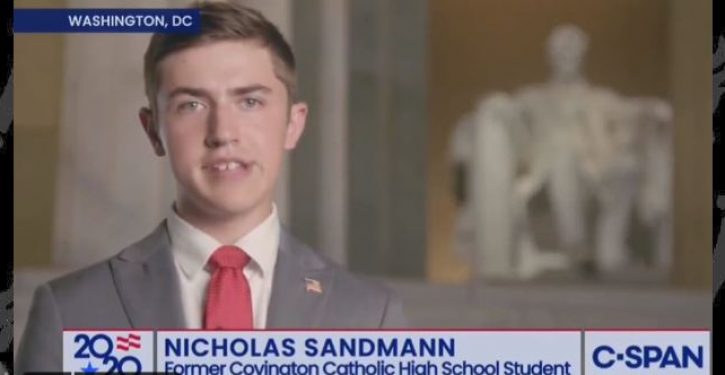 The switchboard here at LU has been lighting up like Christmas ever since a post by attorney and LU contributor Jerome Woehrle went live on Saturday. The main thrust of the post, titled “Could Trump sue Lin Wood for legal malpractice?” is that Wood, who has filed de facto lawsuits on behalf of the Trump campaign, recently descended into something of a “political kook.” Wood’s kookiness, Woehrle argues, has made him more of a liability than an asset to the president and his re-election team.

Owing to the large volume of negative reader comments, some of which were ad hominem attacks on the author while others suggested the post was a DNC hit job, I felt it might be instructive to introduce the perspective of someone who had had up-close and professional dealings with Lin Wood. That person is his most famous client in recent years, Nicholas Sandmann. As John Sexton of Hot Air reminds us:

It was nearly one year ago when high school student Nick Sandmann and his attorney Lin Wood reached a settlement with CNN in the $275 million defamation case against the network. The exact amount of the settlement was never released but … Wood said he was just getting started. Then in July the Washington Post also settled the $250 million defamation suit Sandmann had brought against them. Again the exact amount of the settlement was never revealed and again Lin Wood pointed out there were still more lawsuits to go against CBS, NBC, ABC, the NY Times, Gannett and Rolling Stone.

On Jan. 1, Sandmann, who gave a rousing speech at the Republican National Convention last year, felt impelled to react to one of Wood’s non-stop conspiracy theories. His reaction was brief but effective:

I’m sorry but what the hell https://t.co/oDBEmA8pwX

The list of Wood’s ravings is long and growing. These include urging the president to declare martial law, advising Republicans not vote in the Georgia Senate runoff, and calling for the arrest of David Perdue and Kelly Loeffler, along with Georgia’s governor. He has also cooked up a fanciful conspiracy theory involving Chief Justice John Roberts:

A couple of more questions for Chief Justice John Roberts:

(1) You are recorded discussing Justice Scalia’s successor before date of his sudden death. How did you know Scalia was going to die?

(2) Are you a member of any club or cabal requiring minor children as initiation fee? pic.twitter.com/jGxfgLCk4D

In a separate tweet, Wood accuses Roberts of having been a guest of Jeffrey Epstein on his “Lolita Express,” adding his belief that Epstein  is still alive. Sandmann addressed this tweet as well:

The only problem is that the Supreme Court was in session on that flight date, with Roberts sitting.

There are still countless open questions about the 2020 election. But lashing out in all directions, as Lin Wood has done of late, is not likely to yield answers.