What better way to usher out one of the worst years in the history of the planet than with a few quotable quotes from the man who now pledges he will take us to the Promised Land? Actually, to listen to Joe Biden we were already there before Donald Trump came along and spoiled the picnic. Remember the slowest economic recovery on record? Biden doesn’t.

Here he is on the campaign trail, reminding MSNBC’s Andrea Mitchell and her viewers how Donald Trump “screwed up” the greater economy he inherited from the fictitious “Obama-Biden administration.

By the way, if you notice the four years before, we created more jobs in the last three years than he’s created so far, number one. So like that old phrase goes, everything he inherited, he screwed up. You know, he screwed up the economy so badly. For the last four years, we were not having riots, racial riots. When they occurred, we didn’t have to call in the National Guard. We protected federal property without hurting people. We moved in a direction that made sense. And we worked with police in dealing with — look, the vast majority of police are decent, honorable women and men, but we have to deal with the real problems that exist out there and take them on. You know, he’s a fiction writer in the extreme.

Speaking of fiction, got a load also Biden’s claim that “we were not having riots, racial riots” during the Obama presidency. Evidently Joe’s cognitive deficits have wiped the names Michael Brown, Freddie Gray, and Trayvon Martin from his memory, as well as the multiple assassinations of police officers that occurred on Obama’s watch. Then again, he has forgotten the name of the president her served under:

And who could forget handsy Joe’s advice on respectful behavior toward women? His statement also reveals his command of metaphors. A transcript follows the video.

We, in fact, have to fundamentally change the culture, the culture of how women are treated. … No man has a right to raise a hand to a woman in anger other than in self-defense, and that rarely ever occurs. So we have to just change the culture, period, and keep punching at it and punching at it. No, I really mean it. It’s a gigantic issue, and we have to make it clear from the top, from the president on down that we will not tolerate it. We will not tolerate this culture. [Emphasis added] 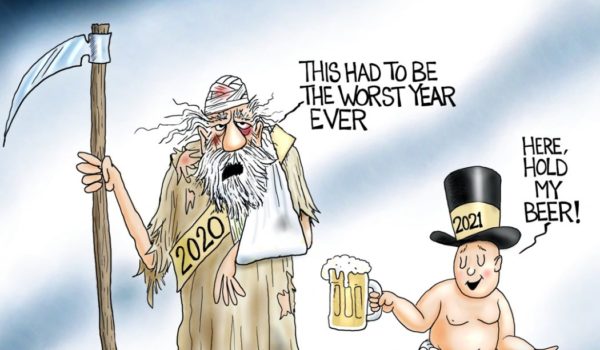 Cartoon of the Day: The good old days
Next Post
Census Bureau will miss deadline, could endanger Trump’s effort to exclude illegals from redrawing districts