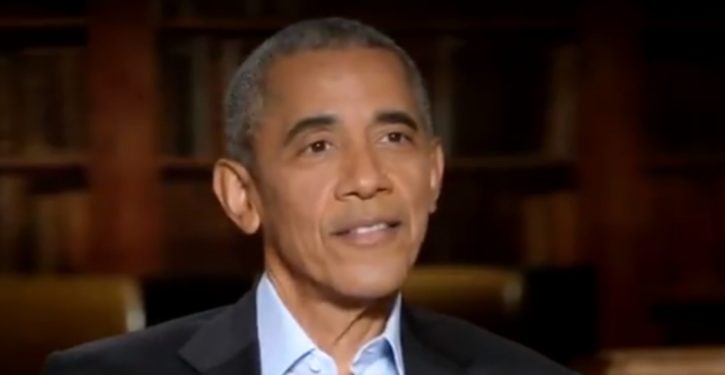 Visionary contemplates power-wielding in sweats from the basement. Late Show video via Twitter

As Monica Showalter suggests, the notable thing about this is former-President Obama’s willingness to talk about it in a popular forum, where his comments are sure to be noticed.  He’s not trying to bury allusions to it, and apparently neither is the Democratic Party.

In the clip, Obama doesn’t come right out and say that he’ll be a string-puller behind a “Biden” administration (and presumably behind a “Harris” administration as well).  But he talks cheerfully of being just fine with having his effect – that of a ventriloquist, as he outlines it – from the shadows, in lieu of holding office for a third term.

It’s obvious he’s not talking about merely crafting messages.  He’s talking about writing policy, and just having other people placed to be the front-men or -women (he uses the term) for policy that comes from him.

And, courtesy of Monica Showalter at American Thinker, the transcript:

… [A]nd I used to say, you know what, if I can make an arrangement where I had a stand-in, a front-man, or a front-woman, and they had an earpiece in and I was just in my basement in my sweats looking through the … stuff, and then I could sort of deliver the lines but someone was doing all the talking and ceremony, I’d be fine with that …

As Showalter says, plenty of people have assumed all along that this would be the general arrangement with the next Democratic presidency.  (Journalist Lee Smith has made the case a number of times.)  There was a reason why Obama bought a home in Washington, D.C. and set up shop there with his political advocacy group Organizing for Action.  Long-time aide Valerie Jarrett has even been living in the Obama home in Kalorama and working from it.

But it’s still jarring to see the framework of the operation chatted about in Obama’s signature breezy tone.

That said – and I thank Showalter for making an eloquent case – this strikes me as not as much to be expected as it might seem, on the face of it.

Oh, it’s perfectly to be expected that Obama will be a nexus of policy spinning in Washington, if Biden takes office in January.  But is it really to Obama’s or Biden’s (or Harris’s) benefit to have that be such an open secret?  What is really the point of talking about it?

It serves from one perspective to undermine Biden and/or Harris.  There’s no need to go anywhere particular with that observation to recognize that it’s simply a valid one.  It sets the Biden-Harris ticket up as a figurehead enterprise.  Why do that in advance?

If the point is to reassure some Democratic constituency, I would think whichever constituency needs that reassurance already has it.  There’s no need to send smoke signals from Stephen Colbert’s late-night show.

Long-time readers know I don’t think Obama is the ultimate string-puller to begin with.  I don’t think there’s only one, for that matter.  The dark-money donors of Democracy Alliance seem to be the place to start in that regard.  Obama won’t have the executive pen and phone, or command of the U.S. armed forces again; as a seat of political power, he is dependent on the dark-money crowd now, not the other way around.

Notably, the agenda Biden has been talking about – to the extent he talks; there are also the disclosures from his media representatives – comports fully with the transnationalist progressive agenda of the Democracy Alliance donors.  Davos, Paris, Aspen – wherever they meet, they’ve been talking up the same agenda for 30 years.  It’s an agenda that sells out U.S. law, and our understanding and expectations about liberty and rights, completely.

Perhaps Obama is announcing himself as a lightning rod and a negotiating front-man in his own right, not just to clarify his importance to process, but to deflect attention from the donors behind the curtain.  He’ll be the one in sweats in the basement, unlike President Whoever, tooling around doing the ceremony thing in suit jackets and leather-soled shoes.  But Obama will be the donors’ point man.  Congratulations, America.