Rep. Ilhan Omar downplayed recent party infighting and claimed the Democrats are one “big family” working on behalf of the people.

Omar (D-Minn.), a member of the “Squad,” recently called out fellow Democrat Joe Manchin (W.Va.) for suggesting extremist platforms were to blame for the party’s 2020 election losses. “Stop worrying about progressives, this might be the reason we don’t win the Senate races in Georgia. Good grief,” she tweeted to Manchin.

In an interview on MSNBC’s “AM Joy” this past weekend, however, Omar was preaching party unity.

“When you think about our party, Speaker Pelosi always says we are a big tent, and that means that we are a big family,” she claimed. “We all have our own constituencies that we have to serve,” she continued. “We are part of a caucus working on behalf of the people. We think of ourselves as the party of the people.”

But Omar’s suggestion that the party is unified and focused on serving the people is belied by, among other things, an audio of a wild conference call leaked shortly after the election. It featured several members of the Democratic caucus “angrily confronting” House Speaker Nancy Pelosi over their election losses and blasting the “Squad.” Members of the quartet fired back with allegations that moderates were being racist.

Later in the call, self-described Democratic Socialist Rashida Tlaib accused her colleagues of only wanting to speak to issues that motivate white suburbanites.

"To be real, it sounds like you are saying stop pushing for what Black folks want,” she said. https://t.co/NGlLlPQb6P

Still, Omar put up a unified front. “I know that Biden invited the American people to be a unifying force against darkness, and as a caucus, we have to be unified against that,” she said. “The American people have decided to put us in charge to say we want something different. We can’t disappoint them.”

There are two significant problems with Omar’s above statements .

First, the American people hardly gave the Democratic Party a mandate to implement change. Presidential race aside, they voted overwhelmingly against Democrats. In fact, Republicans have likely held on to power in the Senate while surprisingly flipping numerous seats in the House of Representatives, all while scoring historic victories in state legislative chambers.

Second, Biden may have invited unity, but the same respect hasn’t been shown for his so-called moderate policies. Just ask “Squad” leader Alexandria Ocasio-Cortez. It was she who said mere months ago that she and Biden didn’t even belong in the same party. “In any other country, Joe Biden and I would not be in the same party, but in America, we are,” Ocasio-Cortez said in an interview with New York Magazine. “Democrats can be too big of a tent,” she added with regard to more moderate members. “They let anybody who the cat dragged in call themselves a progressive. There’s no standard.” 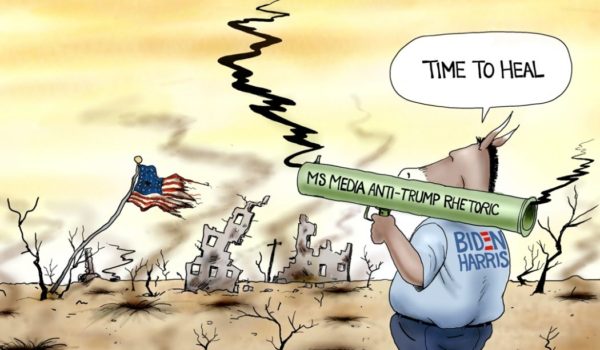 Cartoon of the Day: A message of unity
Next Post
The Grand New Party: Here’s what’s in store for GOP without Trump at helm