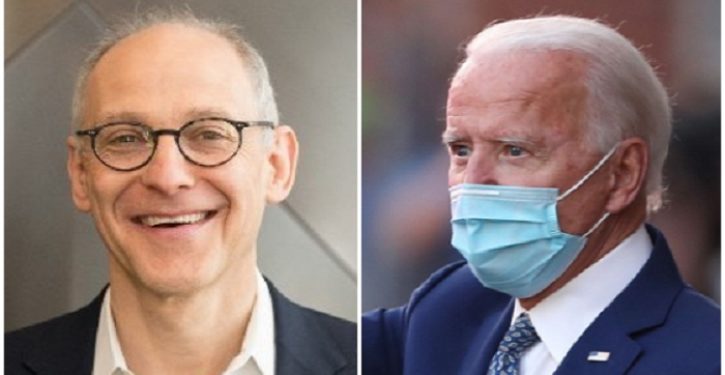 He also thinks we should be good “global neighbors” and distribute the vaccine globally as a priority over Americans, but that’s another story.

Dr. Zeke Emanuel, an advisory board member appointed to Joe Biden’s coronavirus task force, has argued that rather than vaccinate old people and the people with higher risk first, the priority should be inoculating younger, more productive citizens of the state. The recommendation is in keeping with an article Emanuel penned in 2014, arguing that the quality of life by the age of 75 had dwindled to the point that one would be “better off” if nature took “its course swiftly and promptly.”

“The fact is that by 75, creativity, originality, and productivity are pretty much gone for the vast, vast majority of us,” he wrote.

Biden, the presumed president-elect, will be 78-years-old when he is inaugurated in January.

Emanuel’s article, titled “Why I Hope to Die at 75,” appeared in The Atlantic.

According to Greg Scandlen, the founder of Consumers for Health Care Choices, Emanuel, who was one of the architects of Obamacare, has done extensive work on a “complete lives system” of allocating health resources. “This would have prioritized adolescents and young adults in receiving health care and put infants and the elderly at the end of the line,” Scandlen wrote, also in 2014. The system interprets how to allocate, among other things, vaccinations during a flu pandemic, when the supply may be limited. (RELATED: University of Chicago professor claims infanticide is morally acceptable)

In the same Atlantic piece, Emanuel writes that the elderly should eschew a flu shot, and in the event of a pandemic, “a younger person who has yet to live a complete life ought to get the vaccine or any antiviral drugs.”

Turns out Zeke Emanuel wants to look at limiting #COVID vaccines according to life expectancy. What’s next, limiting treatment?

Listening to the ‘Scientists’

Meanwhile, another man rumored to be on Biden’s Cabinet radar as Attorney General of the United States, Andrew Cuomo, wants to hold off on the vaccine for two months, potentially costing countless lives, just so he can say Donald Trump didn’t distribute it.

“You have two months, and we can’t let this vaccination plan go forward the way the Trump administration is designing it because Biden can’t undo it two months later, we’ll be in the midst of it,” Cuomo stated.

“I’ve been talking to governors across the nation about that; how can we shape the Trump administration vaccine plan to fix it, or stop it before it does damage.”

Andrew Cuomo, who is responsible for more covid deaths than any politician in the world, says it’s bad news a covid vaccine arrived during the Trump administration and he will seek to limit its distribution. pic.twitter.com/Z4NkmpiGMd

Drugmaker Pfizer announcing Monday that their COVID-19 vaccine is proving to be over 90% effective and that they hope to have enough doses to immunize 15 to 20 million people within a month.

My God is he a downer…has his handlers not told him about the vaccine that that the Trump Admin funded? pic.twitter.com/UxlvoAFvqb

If Emanuel has a say, the “light at the end of the tunnel” may take on a whole different meaning.

Republicans flip another House seat (how many will they gain?)
Next Post
Ariz. Rep: Number of potential non-citizen voters higher than Biden’s lead in state