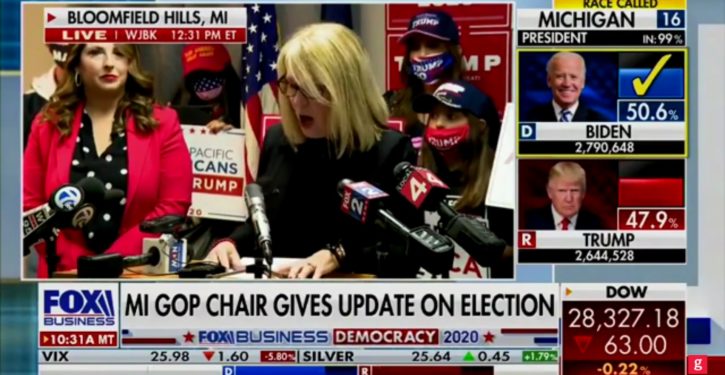 There is no voter fraud. Democrats chant this mantra year after year, election after election. This year we are hearing of numerous examples of the same old, same old — dead people and parakeets voting. But with the stroke of genius that has been mass voting by mail, voter fraud is just the tip of the iceberg. A mountain of other issues have emerged, from voters receiving multiple ballots to the sheer bureaucratic nightmares that are bound to arise when the federal government automatically sends out 43 million unsolicited ballot.

Add to that unforeseen horrors like the one that has arisen in Michigan:

If all this wasn’t enough, in Antrim county. ballots were counted for Democrats that were meant for Republicans, causing a 6,000-vote swing against our candidates. The county clerk came forward and said tabulating software glitched and caused a miscalculation of the vote. Since then we have now discovered that 47 counties use this same software in the same capacity. Antrim county had to hand count all of the ballots, and these counties that use this software need to closely examine their results for similar discrepancies. The people of Michigan deserve a transparent and open process.

Multiply this by the number of glitches that haven’t been uncovered and you begin to have some sense of the magnitude of the problem. How could the Democrats, who watched the nightmare of Obamacare online enrollment unfold ten short years ago, have overlooked the possibility of glitches in this even more massive process, especially where one of the main “players” was the U.S. Postal Service, the least well-run  government agency in history?

The problem now is trying to get the genie back in the bottle. Meantime, the Democrats are urging all Americans to accept the outcome of the election (viz., that Joe Biden is president) and get on with their lives. But as J.E. Dyer warned yesterday in a must-read column:

America … as she is supposed to be, cannot survive an election this tampered with.  If tampering works in 2020, it will never stop – although it probably won’t have to continue for very long, because the Constitution will be shoved aside anyway, and elections on a schedule, with candidacy open to anyone who qualifies, will be a thing of the past.

Maybe that’s what the Democrats had in mind all along.