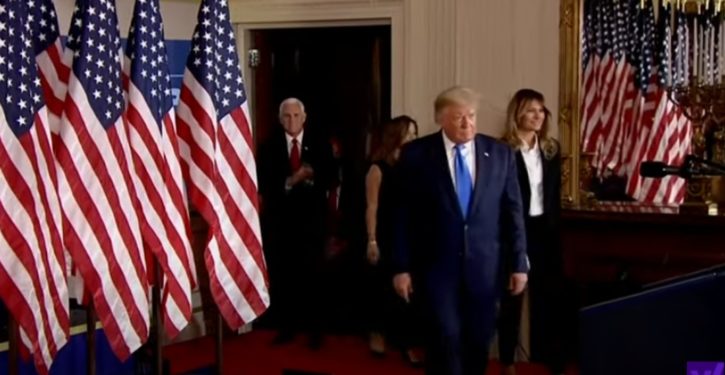 The Trumps and the Pences come out for post-vote remarks in the early hours of 4 Nov 2020, after 3 states and news outlets declare all stop ("delay") on vote results. Video via Yahoo!, YouTube

[I’m calling a lid as soon as the president makes his statement about the election, expected any moment now.  The 1:45 AM update at the bottom is the – go figure – bottom-line summary on the state of the election at this point. – J.E.]

In the interest of featuring the latest information and where we stand with the election unresolved, at 2:30 am on Wednesday, I am moving some material over from the original election thread and adding a conclusion to it in this new, more focused article.

The midnight summary from the original thread lays out what sent the all-stop signal for the presidential vote.

Midnight/12:00 AM: Bloomberg reporter says Wisconsin, Michigan, and Pennsylvania all say they won’t be able to complete their vote count tonight.  So it begins.  We were being conditioned to expect this.  Any suspicion about it will be called “conspiracy theory.”  It’s a really good question, however, why these particular states would be hamstrung in their counts, when all states are expecting more by-mail ballots than usual this year — the obvious “reason” for not being able to identify a winner or have a definitive vote tally in an expeditious manner.

Where the races stand now in those states:

Oh, and here’s the tweet from Saleha Mohsin (with my RT and comments)

Pct breakout in the 3 states:

Most days allowed to count add'l ballots seem to track exactly w/where delayed results are expected. All states have outstanding ballots though. https://t.co/BTfG4eG1Qz

It can’t help looking like this is an adaptive ploy to start bringing in just enough by-mail ballots to overcome Trump’s substantial leads in the three states.

Other states could have been chosen for “delayed results” — but those states don’t have judges’ rulings that they can keep counting ballots into next week.

00:30 EST 4 November 2020:  Minnesota has just been called for Biden, which looks reasonable if we accept that the vote has been honest there.  We probably shouldn’t, but you have to pick your battles.  Biden’s officially at 53.1% to Trump’s 44.9%, with 75% of the vote counted.

Iowa has been called for Trump.

1:45 AM:  We have a very interesting situation here.  Look, if you will, at the midnight update, which shows the state of play in the three states where Democratic state leadership has said the results of the vote won’t be known for days.  Trump is substantially ahead in each state.  It’s not clear how many mail-in ballots are at issue in each of those states; I just heard a figure of 245,000 for Pennsylvania, from the War Room livestream.  But I don’t know what that’s based on.

At any rate, the bottom line is that the Trump lead is significant in those states.

The network bigs have all called Arizona, and in fact did so relatively quickly (considering the polls closed there some hours after they closed in the East, where most of the states have been called).  But there are still a lot of votes outstanding in Arizona, including — according to Governor Ducey’s office — 900,000 by-mail ballots that have yet to be counted.

Katie Pavlich tweeted on that a short time ago.

Just spoke to AZ Governor Doug Ducey's office. There are at least 900,000 votes outstanding that haven't been counted. About half are Maricopa. W/ every update, they say it's breaking significantly toward Trump 2-1.

Doesn't mean a Trump win, but that's still a lot of uncounted

Everyone I’ve listened in on, other than the network bigs, has said it was premature to call Arizona.  I saw earlier that the governor was complaining about it, although I can’t recover the source of that information.

The 900,000 by-mail ballots alone would be enough to erase Biden’s 160,000-vote lead, even if they only broke 50-50 for Trump, or less.  Obviously, we don’t know what’s going on with the rest of the in-person vote.  But there is a lot of room for Trump to overtake Biden in Arizona.

So the difference between how the similar situations are being treated in Arizona versus the “Rust Belt” states can’t help looking like a plan being executed on a rigidly partisan basis.  The fact that Ducey hasn’t done what the other three states have looks mainly like he wasn’t in on the plan.  He’s the Republican in this mix.

Maybe he’ll come out and assert that we won’t know the results from Arizona for days.  That would at least put him on the same sheet as the other three states.

But it won’t force the media vote-callers to treat all four states the same.  We can assume they’ll keep their call on Arizona in place, while piously respecting the statements of the other three states and refraining from calling them for Trump.

So here we have it: a Republican-led state in which Biden is up, but there’s an awful lot of vote left to count, has been called for Biden.  Three Democrat-led states in which Trump is up — by a lot — and there’s a somewhat similar situation in terms of votes left to count have NOT been called for Trump.  In fact, the state leaders have said voting results can’t be expected for days.  These are the states that have gotten judges’ rulings allowing them to keep counting ballots no matter how out-of-compliance those ballots are with the terms of state voting law.

Presumably, Arizona intends to comply with state voting law.  Which in turn, presumably, means the state has no plan to string the vote along introducing additional ”by-mail” (or suddenly “found”) ballots until either Democrats or Republicans get the result they want.

Oh, and one more thing.  Some readers may have already heard about the tweet from Pennsylvania Attorney General Josh Shapiro over the weekend:

If all the votes are added up in PA, Trump is going to lose. That’s why he’s working overtime to subtract as many votes as possible from this process.

For the record, he’s 0-6 against us in court. We’ve protected voting rights. Now, ignore the noise—vote!https://t.co/mN8t6TDud7

That’s pretty pointed.  If you’re the suspicious type, you’d probably look at Trump’s big lead in Pennsylvania and interpret Shapiro’s emphatically partisan statement to mean that no matter what the raw vote is, Biden is going to be declared the winner in Pennsylvania – and the announcement on Tuesday that the vote results won’t be known for days is in line with Shapiro’s irresponsible, partisan, and unacceptable assertion that “Trump is going to lose” (something he could not possibly know, in a forthright empirical sense).

President Trump’s remarks early on Wednesday morning start about 21:30 in the video. 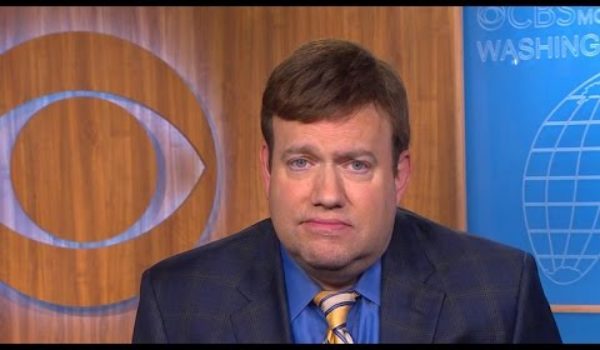