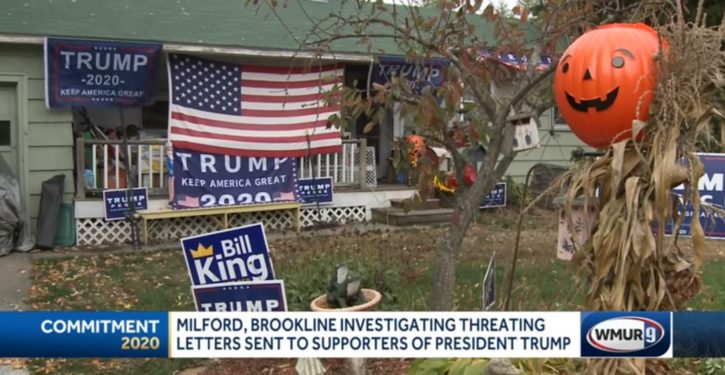 Although the Left claims that their worst nightmare is Donald Trump refusing to accept the outcome of the election in the event of a loss, for many the image of the president in handcuffs being frog-marched across the White House lawn is more of a dream.

Regardless of their motivation, some Democrats have made it clear they will stop short of noting, including terrorism, to ensure a peaceful (that’s as in “peaceful protest”) transition of power.

On Monday, WMUR reported that supporters of Trump in the town of Milford, N.H. received letters threatening to burn down their houses if the president does not concede the election.

“Dear neighbor,” the letter begins. “You have been identified by our group as being a Trump supporter. Your address has been added to our database as a target when we attack should Trump not concede the election. We recommend that you check your home insurance policy and make that it is current and that it has adequate coverage for fire damage. You have been given ‘Fair Warning.’”

“Always remember, that it was ‘you’ that started this Civil War,” the letter adds.

One resident of Milford who asked to be identified only by her first name is quoted a saying, “I was very taken aback. This is my home. You’re not supposed to threaten my home. I’m very worried in the sense that this is going on in my town.”

Milford police said the same letter was mailed to other homes that have signs supporting Trump’s presidential campaign. The department is now investigating and has contacted the state Attorney General’s Office.

Two people in Brookline [a neighboring town] have also received a letter.

“I was kind of quite shocked that anyone would send a letter out with that type of threat,” said Brookline police Chief Bill Quigley.

Quigley said he alerted the U.S. Postal Inspection Service and said whoever is behind the letters could face serious charges.

“Not only with us, with criminal threatening,” Quigley said. “It’s on a felony level, because of the threat of burning homes down and causing injury, but it could also be with the postal inspectors, something on the federal level.”

Capt. Craig Frye, of the Milford police, told Fox News the department referred the case to the U.S. Postal Inspection Service and the state attorney general’s office, which is conducting an investigation.

Intimidation and threats of violence have become commonplace among the Left during this election season. As we and others have reported, liberals have made it clear there will be more violence — even murder — if Joe Biden does not win in a landslide.

Yes, Biden needs black men. But do they need — or want — him?
Next Post
Minneapolis residents sue city for failing to staff enough police amid crime surge