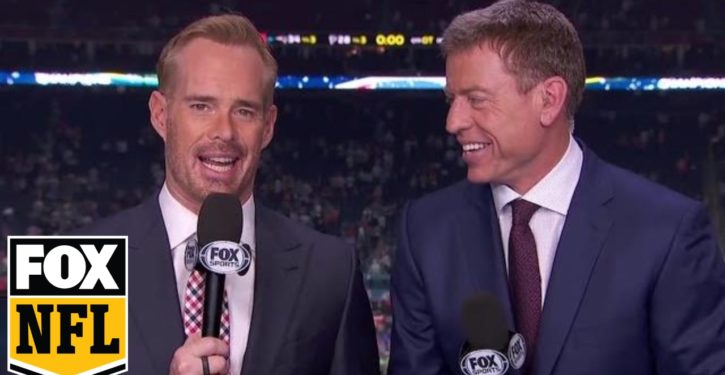 The National Football League’s season of political correctness — which began with the rechristening of the Washington Redskins as the “Washington Football Team” and continued with Commissioner Roger Goodell’s announcement that social justice messages would appear in the end zones in every stadium — became more politicized on Sunday.

FOX broadcasters Joe Buck and Troy Aikman apparently weren’t aware that their microphones were live when the pair expressed dissatisfaction over one of the pre-game activities at Raymond James Stadium in Tampa where the Buccaneers were set to host the Green Bay Packers. But it wasn’t the singing of the “Black National Anthem” that raised their hackles. Quite the opposite, it was a military flyover.

Aikman and Buck’s main grievance seemed to be the high cost of the flyovers with Aikman grousing, “That’s a lot of jet fuel just to do a little flyover” and Buck adding, “That’s your hard-earned money and your tax dollars at work!”

But Aikman’s next comment made it clear where he was really coming from:

That stuff ain’t happening with [a] Kamala-Biden ticket. I’ll tell you that right now, partner.

I hate to break it to Joe Buck and the morons on this thread but military pilots have to maintain a certain number a flight hours to stay qualified. They use things like this to help them do that.

Buck and Aikman — and especially Buck — are already widely hated by Green Bay fans for “their constant negative input about our team. We are sick of the biased announcing always coming from them.” It looks like they may have made some other enemies with their inappropriate endorsement of the Biden-Harris ticket on Sunday.

Debate commission to mute mike of opposing candidate at beginning of segments
Next Post
Will Latinos help Trump win Fla. because of his embrace of flags?