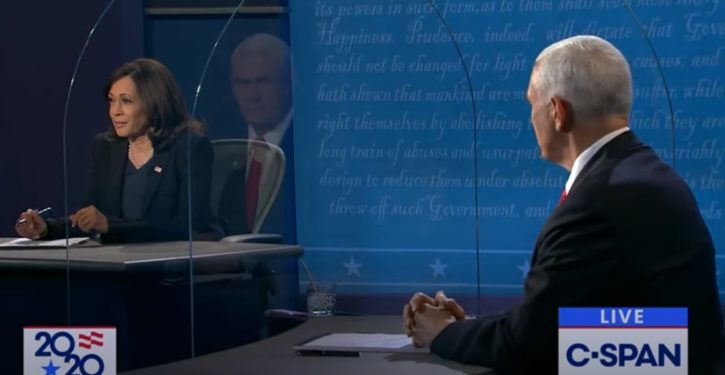 This will be short, as there really isn’t much to say now about decorous old-format debates.

I thought Mike Pence won.  I’m sure there are folks who thought Kamala Harris won.  She couldn’t have won on substance or gravitas, but if you actually believe every substance-free piece of gossip, rumor, innuendo, and flat-out mendacity that comes from the mainstream media about the Trump administration, you’d have to award her points for faithfully repeating it.

The “won” thing is kind of neither here nor there though.  Pence said the things Trump’s voters wanted to hear.  I think Harris said the things the farther-left base of the Biden-Harris ticket wanted to hear.  She did veer into voodoo economics a few times, such as when she assured us that there would be 7 million new jobs because Joe Biden isn’t going to raise taxes on people making under $400,000 a year.

(We’d find that that last claim about raising taxes is simply false, incidentally, if Biden-Harris were to implement their full agenda.  The increased contributions from the taxpayers for “Medicare for all,” and the carbon-taxing plan in the Green New Deal, would quickly eat into the incomes of people making under $400,000 a year.  And those are just some of the examples.  You’re still being taxed more even if the taxes aren’t collected from your employer and reported to you on a W-2.)

At any rate: on Twitter, the universal conclusion was that the fly (the fly that landed on Pence’s head and crawled around for a bit) won the debate.  Fair enough.

Harris spoke 10% more than Pence, and yet Nancy Pelosi biographer Susan Page spent a good chunk of the debate telling Pence he was talking too much. https://t.co/uMSEms11AB

The plexiglass virtue barriers looked like a 1970s game show.

Fox’s Harris Faulkner had a good comment about the traditional style debate format.

Overall IMO, the debate format is stale and unimaginative. All the talent we have in the news production industry, can’t we do better? It’s not 1965. And that was a good year, Mustang… me. But, please let’s raise the game to meet the stakes. #debate

I agree; it did seem stale.  I don’t think that would have been noticed nearly as much if we hadn’t gone 15 rounds in the first presidential debate, with plenty of punches being landed.  A key difference with the Trump-Biden debate is that it actually fought through to some policy issues on the topics raised in the questions.  Instead of being a formulaic exchange in each case, we heard Trump pound out policy points like a sledgehammer, and occasionally got Biden on record with points you could at least riff on.

People remember it as distressing in tone, but what was really stressful about it was the clash of policy ideas.  That clash is as existential and untamed as it sounded in the first presidential debate – because it’s real, and fundamental. It’s not just about the degree of socialism we’re all being cry-bullied into assenting to.  That’s what the old-school debates of the last 30 years have been about.  And it’s a confrontation we have to have.

What we saw starkly with the V.P. debate, by contrast, was how very much the old-school format doesn’t give us that.

It was a bit melancholy to see a few fairly well-known conservative figures on Twitter longing for a return of that old, familiar format.  All the old format does is set up a superficial confrontation in which outrageous allegations are protected from challenge by ritual decorum.

The point of the old-school format, it is blindingly obvious now, is to arrange for a moderator to tell at least one candidate to be quiet and stop answering, after the candidate has been slandered or made falsely responsible for outright lies about reality.

In the last 30 years, I have never seen moderators administer this privilege even-handedly.  It’s always the Republican candidates who are being shushed and not allowed to counter the literal lies, as well as loaded allegations, that are fired at them.

The old-school format is thus a convenience for introducing lies and prejudicial ideas under cover of protocol, where they can be fenced off from challenge.

How that is better than a knock-down drag-out like the Trump-Biden debate escapes me.  “We left a lot of falsehoods dangling out there unaddressed, but at least no one raised his voice and the moderator got the last word” is simply not good enough, when the fate of the Republic hangs in the balance.

It’s not as though the old-school format has been giving us impressive debates on policy.  It hasn’t.  I summarized that point in a tweet during the debate, and see no reason to elaborate further on it here.

Seeing others take up the theme that this is like our old #debates from years past.
I remain curious as to why this is better.
Moderator: loaded question.
Candidates: talking points.
Minor back/forth gratifying to partisans.
Result: Titanic's deck chairs remain tidily in place.

The traditional debates not only wouldn’t let us change the course of the Titanic; they wouldn’t even let us rearrange the deck chairs.  Everyone had a role, and the point was what we got on Wednesday night from moderator Susan Page, and from Pence and Harris:  questions framed in the terms favored by the mainstream media; talking points from the candidates, which were unlikely to actually answer the questions, because what the candidates were there to do was tend their constituencies; and an undisturbed arrangement of deck chairs on the Titanic at the end of it all.

Mike Pence was better at it, although he got less time and was silenced lopsidedly by Susan Page when he tried to correct the record propounded by Harris.