The House Speaker’s flailing attempts to throw anything she can at the wall in the hopes that something will stick was evident in an interview on MSNBC.

Pelosi (D-Calif.) accused the GOP of trying to fill the seat left vacant after the passing of Justice Ruth Bader Ginsburg as a means to taking away clean air and clean water.

Not to mention LBGT protections. None of which is true.

But her unhinged rant regarding children was truly something to behold.

If Anything, Ms . Pelosi, the SCOTUS Pick Will Save Children

One can rest assured that Pelosi made these comments without detecting a hint of irony as a representative of the party that supports abortion with almost no restrictions.

You mean they want a Justice that could possibly overturn Roe v. Wade? An act that would literally save the lives of countless children?

Instead of that reality, you get Pelosi claiming, “They’re coming after your children. Protect your children from what they are trying to do in this court.”

With a conservative-leaning court, the children might finally be protected from the party of ghouls.

Coming from the Anti-Children Party

It was just last year that Pelosi trashed a pro-life bill in Alabama that would save the lives of countless innocent children, calling the legislation “heartbreaking.”

Pelosi’s pro-abortion stance is so extreme that a Vatican chief insisted in 2013 she should not be allowed to receive communion. Now suddenly, she’s a protector of children.

Naturally, she’s not the only person on the left to claim Republicans pushing a SCOTUS pick through is going to cost people their lives. Hollywood actor and director Rob Reiner, in the midst of the news involving the Supreme Court controversy, warned Americans that they could die if they vote for the wrong person. “We are at an existential crossroads,” he tweeted. “Whether we live or die actually depends on our vote.”

We are at an existential crossroads. Whether we live or die actually depends on our vote.

Just months ago, Senate Minority Leader Chuck Schumer (D-N.Y.) threatened Supreme Court Justices Neil Gorsuch and Brett Kavanaugh with violence. “I want to tell you Gorsuch, I want to tell you Kavanaugh, you have released the whirlwind and you will pay the price,” Schumer said from the steps outside the court.

He made this threat as the SCOTUS heard arguments on a case involving a pro-life Louisiana law.

Chief Justice John Roberts slammed Schumer for the threat, then bowed down to him in joining the four liberal justices on the court in striking down the measure.

He failed to protect the children.

Lives are definitely on the line with this next nominee, just not the ones Democrats are claiming. 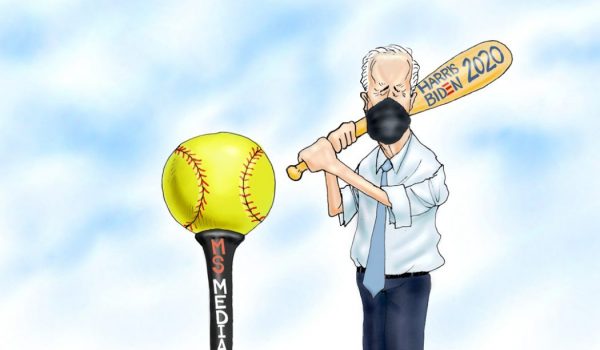 Cartoon of the Day: Softballs
Next Post
DOJ charges more than 300 with criminal actions ‘under the guise of peaceful demonstrations’