If Joe Biden can make the presidential race a referendum on anything at all, it will be on Donald Trump’s handling of the COVID-19 pandemic. In March he claimed that the U.S. was “paying the price” of the coronavirus because of Donald Trump’s ill-advised decision to eliminate an office Barack Obama set up as president to deal with pandemics. Not only was the claim proven false, but it was also revealed that it was under the previous administration — the one Biden likes to call the Obama-Biden administration — that the federal stockpile of N95 masks was depleted and never restocked.

Undaunted, Biden went on to accuse the Trump administration of turning down WHO testing kit for COVID-19, adding that as president he would “immediately take advantage of their offer.” But a fact check of Biden’s accusation by Kaiser Health News found that “no discussions occurred between WHO and CDC about WHO providing COVID-19 tests to the United States” had occurred, adding “This is consistent with experience since the United States does not ordinarily rely on WHO for reagents or diagnostic tests because of sufficient domestic capacity.”

Since then, Biden has tried assailing Trump over the number of deaths from COVID, all of which he blames the president for. As to how many deaths there have been, that varies. In May, Biden declared that 600,000 Americans had died of the virus, when the actual number of deaths was closer to 65,000.

But Biden’s greatest performance yet came on Sunday, when he announced that an estimated 200 million people would die, “probably by the time I finish this talk.”

Joe Biden: “It’s estimated that 200 million people will die, probably by the time I finish this talk.”

That didn’t happen thankfully, but if it had the deaths wouldn’t have been from the coronavirus. So far the disease has claimed 200,000 lives, meaning Biden was off by a factor of one thousand. 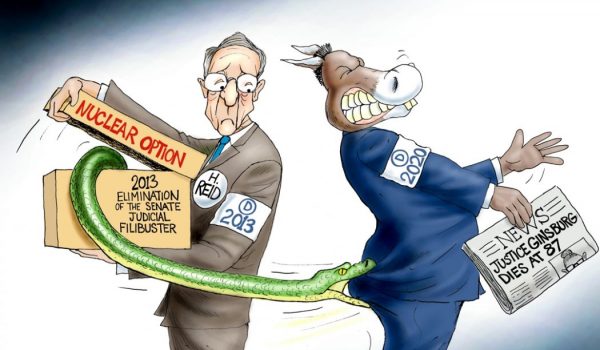