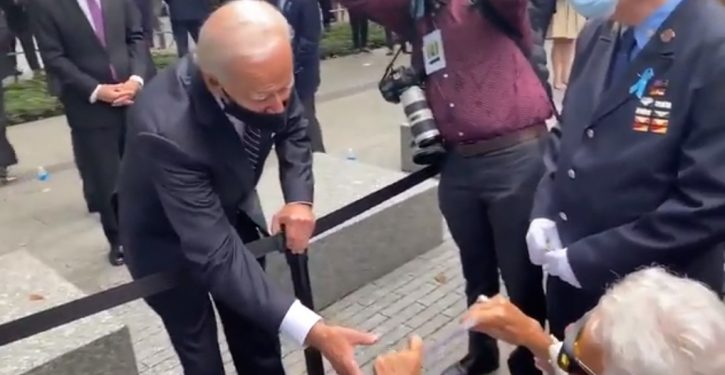 Let me say at the outset that the pain of outliving one of your children is unimaginable for me. My heart goes out to Joe Biden, whose own son died of cancer in 2015.

Having said that, I wish the former vice president would stop capitalizing on his son Beau’s death by spreading the lie that he died in combat in Iraq. (RELATED: If you pare away Biden’s mental unfitness and rape allegations, you’re still left with his lying and plagiarism)

Biden told this whopper last week when he was confronted by an Air Force veteran who accused him of having blood on his hands for having voted for the Iraq War as a senator. “We are wondering,” the veteran asked, “why we should vote for someone who voted for … and enabled a war that killed thousands of our brothers and sisters?” intimating that close friends of his were casualties.

Biden’s reaction did little to mitigate the veteran’s charge that he supported an ill-fated war. But more importantly, the Democratic candidate deliberately conflated his son’s service in Iraq, from which he returned alive and well in 2009, with his death from disease six years later.

On Friday, he did it again at the 9/11 commemoration ceremonies in New York. In the video that follows, Biden can be seen studying the photo of a 90-year-old woman’s son, who died in the terrorist attack. Handing the photo back to her, he says, “I lost mine two years ago.” The woman asks about the circumstances of Biden’s son’s death, which is inaudible. Biden replies, “No, it was in Afghanistan — I mean, Iraq.”

As the conversation progresses, Biden gestures toward his heart at one point and says, “It never goes away,” referring to the pain. I believe him. He also lost his first wife and a daughter in a traffic accident in 1972, so he’s no stranger to grief.

I just wish he didn’t need to politicize and falsify his loss in the hope of scoring votes.

BLM mocks honoring the memory of 9/11 victims with the hashtag #AllBuildingsMatter
Next Post
Hmm: Schiff touts new DHS ‘whistleblower’ — but previously accused him of ‘misleading’ Congress