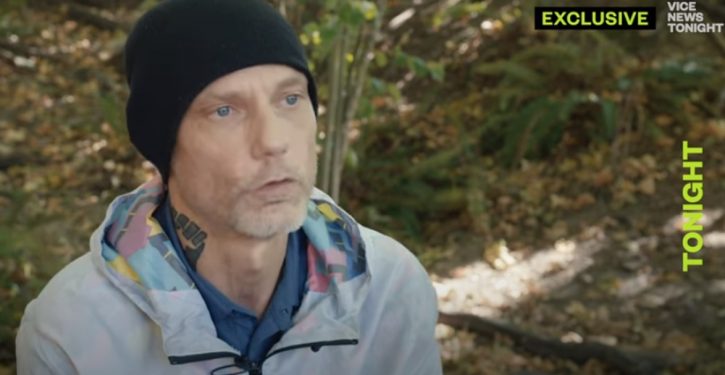 Thursday evening saw observers ranging from angry to bemused on social media as a Vice News interview with Portland shooting suspect Michael Reinoehl aired across the Web.  Reinoehl, a frequent participant in “protests” in Portland who described himself on social media as “100% Antifa,” had become the primary suspect in the 29 August shooting of Aaron “Jay” Danielson, a member of the Patriot Prayer group who joined the Trump caravan through Portland last Saturday before being killed at point-blank range on a city street.

This tweep (Carlos Osweda) did an in-depth analysis of the shooting, which in his view was premeditated.  It did seem to be coordinated by multiple people on-scene, including Reinoehl.

Lots to talk about.

We'll finish with @realDonaldTrump letting you know what we're up against and what he's doing about it. pic.twitter.com/z2UPiWhyMA

(For an original video at Facebook from a pedestrian who caught the whole thing, see this link.  It’s not available for embed.  Start at about the 17:00 minute mark to see the event.)

Yet there was no word for several days on any attempt to apprehend Reinoehl.  Instead, Vice News tracked him down and got an interview with him.

In the interview, Reinoehl effectively admitted he had shot and killed Danielson.  He claimed he was protecting a person of color when he did it, but nothing in the on-scene video (above) appears to back that up.

It’s not clear at the moment if the Vice interview had anything to do with the seemingly belated movement on Reinoehl.  News of the event is about three hours old at this point.  But around 7:30 PM on Thursday, 3 September, Reinoehl was reportedly under surveillance as he left an apartment building in Lacey, Washington, located adjacent to Olympia about 100 miles north of Portland.  He got into a station wagon, apparently preparing to flee the scene, and reportedly had a gun.  He got back out of the car when officers in a federal fugitive task force boxed the car in and fired into it.

Witnesses said Reinoehl fired at the officers, who then fired back in an exchange of some 30 to 50 rounds.  Reinoehl was killed.

**WARNING: Some may find footage disturbing**

Officials speaking to the Oregonian said “they didn’t know why Reinoehl was in Lacey.”  This seems to indicate he had no known ties there.  Whatever the reason, it’s probably fortuitous that he crossed the state line, as that would have simplified a decision to hand his pursuit over to the U.S. Marshals.  Frankly, we had little reason to expect Portland to do anything about Reinoehl.

The Carlos Osweda tweet thread has details on Reinoehl’s background, including a felony gun charge on which he was released, in July, and a reckless racing rap in Clackamas County earlier this year involving the 48-year-old Reinoehl and his son (racing each other at high speed on Interstate 5).  Reinoehl had his 11-year-old daughter in the car with him for that one.

Reinoehl joined the protest outside Portland Mayor Ted Wheeler’s condo the night before he shot Aaron Danielson.  Reinoehl’s daughter was also with him on that occasion, armed with a baseball bat.

Breaking: Antifa shooting suspect Michael Reinoehl was part of the antifa protest outside @tedwheeler’s condo the night before he killed Aaron “Jay” Danielson. He brought his 11-year-old child, who was armed with a bat. He was close with antifa black bloc. https://t.co/C612s1JDms pic.twitter.com/Q6iXBiZCpf

Exclusive: The victim of last night's deadly shooting in downtown Portland is Aaron Danielson, who went by Jay. His family has been informed of his death.

Portland Police have not released details about their investigation and the shooter is at-large. #PortlandRiots pic.twitter.com/4y8j9fSJ5K

As Pappas told Carlson, the U.S. needs a lot of healing.