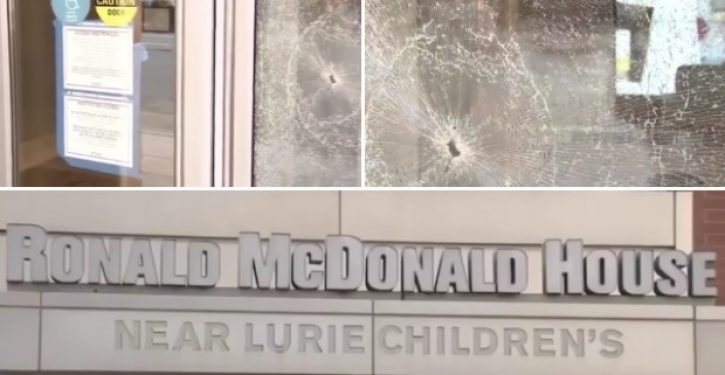 What kind of a loser smashes the windows of a charity that is housing sick kids and their families?

You know, those people that decided an officer-involved shooting was a good reason to ransack the Apple flagship store and pull up a U-Haul to Chicago’s high-end downtown shopping district, Magnificent Mile.

It was so bad that even the derelict Mayor of Chicago said that the behavior was outright criminal.

The people clearing the shelves of Nike in order to protest police brutality took a moment out of the smashing and grabbing long enough to break the doors of Ronald McDonald House located close to Lurie Children’s Hospital.

There were more than 30 families inside with their sick children as well as several staff members who “watched helplessly.”

Chicago’s ABC News 11 quotes Lisa Mitchell, a spokesperson for Ronald McDonald House Charities, as saying administrators were “very concerned there was a lot of activity right in front of the house, people making choices that could put them at risk and put our families at risk so the staff was frightened They are already in a really, really difficult spot, and having this kind of additional stress and worry about getting to and from the hospital even-though we are 5 blocks away because of safety concerns is just doubling the strain.”

Happily, no damage was inflicted on the interior of the facility and no one was injured. The charity avowed, moreover, to continue its support of families through the COVID-19 pandemic and will remain open despite the incident.

Looters smash the doors of the Ronald McDonald House in Streeterville with families and their sick children inside: pic.twitter.com/H1hkwJBaIv

Locald media didn’t seek out a reaction from Black Lives Matter to determine whether they would advise protesters to choose their targets more carefully, but then again, the group has already spoken. Just days ago a Chicago BLM  leader said that looting is “reparations” and should be considered acceptable.