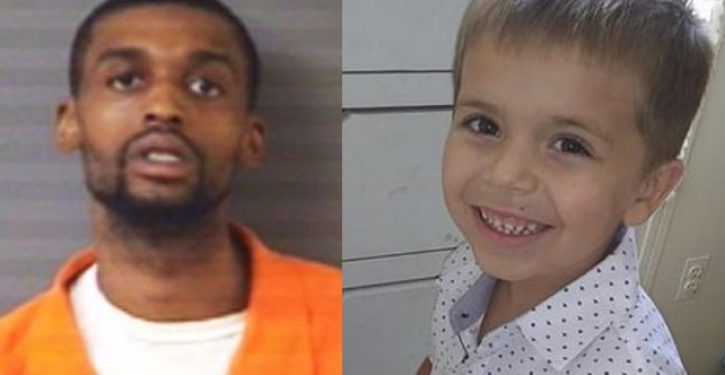 The horrific story out of North Carolina has some familiar elements and some less-familiar ones. The victim, for starters, was a young child. Five-year-old Cannon Hinnant was peacefully at play with his two sisters, ages 8 and 7, in the front yard of their father’s home when a neighbor, 25-year-old Darius N. Sessoms, emerged from his own home, shot the boy in the head at point-blank range, then ran back into the house. The child was transported to a hospital where he died.

The suspect meanwhile fled only to be apprehended the nest night by the U.S. Marshals Service Carolinas Regional Fugitive Task Force. He has been charged with first-degree murder and is being held without bond in the Wilson County jail, according to station WRAL.

The more curious aspects of the story include the fact the children’s father was evidently friends with Sessoms. The two men had had dinner together the previous evening, and Sessoms was at his neighbor’s home earlier Sunday. Equally strange are witness accounts of the crime. Doris Lybrand, who witnessed the shooting, is quoted as saying, “My first reaction was he’s playing with the kids. For a second, I thought, ‘That couldn’t happen.’ People don’t run across the street and kill kids.” Then she was the father’s reaction to the shooting and rushed inside her home to call 911.

Another factor that is impossible to ignore is the races of the suspect and victim, as well as the mainstream media’s reaction. The comments from the killing generated on Twitter speak to this 900-pound gorilla.

5 yr old Cannon Hinnant was executed in front of his sisters for accidentally riding a bike on his neighbors lawn. There’s no pain our justice system can impose on his killer Darius Sessoms that‘ll equate to justice. CNN & MSNBC haven’t even covered it. https://t.co/p2lLofbTfJ

A local crime story about a mostly peaceful execution, clearly unworthy of the precious airtime our national media could devote to more urgent stories about how buying big trucks is racist https://t.co/oGSaz1uMHA

Say his name. 5 year old Cannon Hinnant was executed in cold blood while riding his bike. The accused killer is Darius Sessoms. He allegedly walked up to the boy and shot him dead in front of his sisters. Reverse the races and this is the only thing anyone talks about for a month pic.twitter.com/5V72YhAOlI