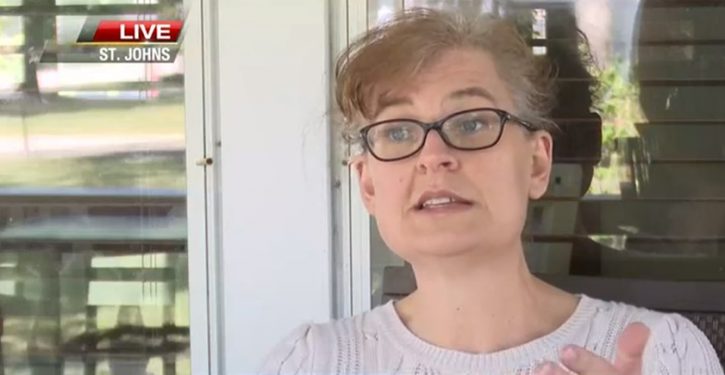 Chalk up another victory for Black Lives Matter. And while we’re at it, death to Norway.

But I’m getting ahead of myself. The story began two years ago when Greg and Kjersten Offbecker moved into a historic mansion in Lansing, Mich. Recently they converted part of the house into a bed and breakfast. The name they chose, Nordic Pineapple, was in part a tribute to the wife’s Norwegian roots, which the couple amplified by hanging a Norwegian flag next to the American flag at the front entrance of the inn:

Before long, the Offbeckers began receiving threatening phone calls and emails. The problem? Here’s the flag that some guests of the inn and motorists driving by thought they were seeing:

The two banners share the same red-white-and-blue color scheme, but then many national flags do. And, yes, both feature broad bands of blue limned in white against a field of red, but the Norwegian flag has no stars. And the bands of blue on it form a cross, not an X.

Last week, according to NBC affiliate WILX, the Offbeckers yielded to pressure. They removed the flag and have updated their marketing materials. “We started to have this concern that it was deterring people away from coming to our bed and breakfast,” Greg Offbecker told reporters. “That they would see it and make this judgement.”

But the Offbeckers’ nightmares may not be over. A false rumor is currently circulating that the home was built by Confederate leaders. Here’s hoping the couple’s fire insurance coverage is up-to-date. (RELATED: Portland fines feds $500 every 15 minutes fence stands outside besieged courthouse)

Ohio pharmacy board reverses ban on hydroxychloroquine after GOP gov’s request
Next Post
VIDEO: Nadler in 2004: ‘Paper ballots are extremely susceptible to fraud’