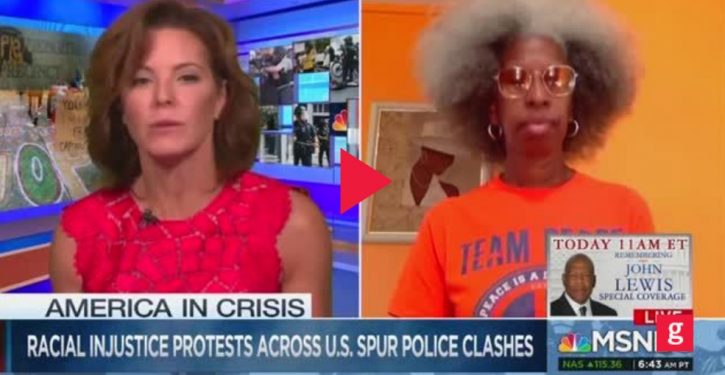 A number of theories have been advanced lately for the unprecedented surge in gun violence in U.S. cities, which is still going strong two months after the killing of George Floyd. New York Mayor Bill de Blasio posited on Saturday that the violence is the result of a reduced police presence on the streets, which sounds right, except that he doesn’t recognize his own role in that reduction. Others are claiming that the violence is reactive. The Associated Press and ABC News became objects of ridicule over the weekend after disingenuously describing a riot in Oakland in which protesters “broke windows, spray painted graffiti, shot fireworks and pointed lasers at officers” as peaceful till it turned violent.

Now another country has been heard from. “Anti-violence activist” Erica Ford was a guest on “MSNBC Live” with Stephanie Ruhle where she floated the notion that the soaring murder rate has been caused by feds running guns into inner cities.

Stephanie Ruhle: But the gun violence we are seeing in cities goes beyond the protesters. What is your answer for people who say, ‘I don’t feel safe in my city right now. Extra police presence sounds somewhat reassuring.’ What do you say to those folks?

Erica Ford: So I want to just go back a little — right after the killing of George Floyd, we started to see the influx of fireworks throughout the nation in communities where people were in their house from the pandemic, losing their jobs, losing their families. They didn’t have money to buy these fireworks. So where did they come from? That was number one. Then after that, we see the influx of guns in communities across the nation. Once again, people were in their house for three months. They lost their jobs. Lost their family members. They were grieving. They don’t have money to buy these guns. Where are they coming from? And so just like in the ‘70s and the ‘80s when we saw the counterintelligence program put guns and drugs into certain communities to create certain behaviors to stop the rise of — of protests and movements, we see it again. And so let’s — what we do in our community is we go out and meet, we work with those who have the highest potential to be shot or shoot someone. And we work with them and we give them the resources and we put more people on the street. We go and we meet with the police and tell them what we don’t want to happen in the community. What we need to see happen together. And we, to the point where we have disband — not disband but there was a situation where the young people were shooting fireworks at the police. And the police called my chief of streets and was like, ‘What should we do?’ He was like move the police out of here. Once you get the police out of there, who are they going to shoot the fireworks at? We’ll take care of the young people. Remove your police from our community. And they did. And there was no incidents of shootings or police incidents in our community that night. And — and there was in different parts of the city. And so if you believe — our stuff works. We’ve made New York the safest big city in America. We’ve reduced violence over 63 percent and it is something that works when you put those who are closest to the problem, resources into them, resources into the community, because as Maya Wiley said earlier, it’s poverty that we’re talking about. It’s poverty. And so, you can’t address poverty with violence.

I’m not sure what the death of George Floyd, which Ford mentions at the outset of her remarks, has to do with her point about the influx of fireworks (which she seems to believe came with the instruction “Please use as a weapon against police”), but the observation is hopelessly naive. As The Atlantic noted a generation ago, “Our Nation’s Poor Live Like Kings”:

According to data compiled by other government agencies, the typical household considered “poor” by census officials has a car and air conditioning. For entertainment, the household has cable or satellite TV, two color televisions, a DVD player and a VCR. If children (especially boys) are in the home, they have a video game system such as Xbox or PlayStation. In the kitchen, the household has the ordinary conveniences: refrigerator, oven, stove, microwave. Half the poor now have a personal computer. A third have a widescreen TV (plasma or LCD); a quarter have a digital video recorder such as TiVo. In all these cases, U.S. Department of Energy data say so.

In today’s version of that list the entertainment system is updated to virtual reality, the TV is a 60-inch flat screen, and $500 sneakers now make an appearance.

The reality is that inner-city residents somehow manage to find ways to acquire whatever they want. Ranked by level of difficulty of acquisition, fireworks would probably be pretty far down on the list of things a ghetto resident might crave. (RELATED: Official told Brooklynites to ‘talk to people’ setting off fireworks every night. Woman did, and was shot to death)

The same appears to be true of guns. While there has been an influx of guns during the first half of 2020, as Ford claims, these firearms have largely been acquired through legitimate means by Americans concerned about their safety. The theory that the government agents have been feeding the guns into minority communities is the stuff of which conspiracies are made.

What’s funnier than handsy Joe Biden going to bat for women? His plagiarizing in plain view
Next Post
Biden accuses Trump of trying to steal election by opposing mail-in voting