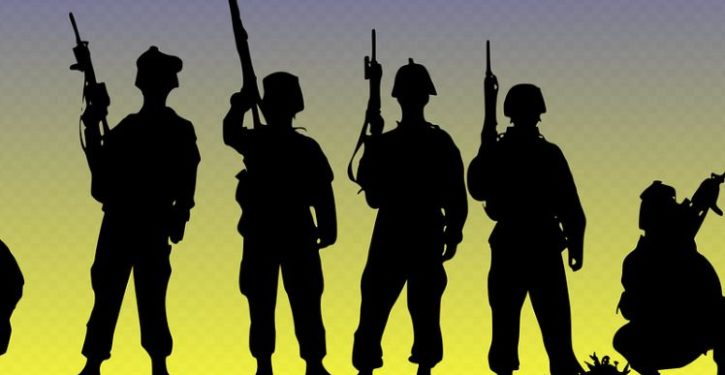 The draft Democratic platform is very negative about whites, mentioning them “15 times, all critical,” as Paul Bedard notes in the Washington Examiner. The “theme in much of the document is that America is divided between whites and minorities … and that most issues, even military court-martials, are a racial crisis.”

The GAO report also found “male servicemembers were more likely” than “female servicemembers” to be court-martialed. But the Democrats don’t claim there is “systemic sexism” against men. Presumably, that’s because they recognize the obvious fact that men have a higher crime rate than women do. The reality is different groups have different crime rates.

The Supreme Court has recognized that the crime rate isn’t the same for different racial groups. In an 8-to-1 ruling, the high court emphasized that there is no legal “presumption that people of all races commit all types of crimes” at the same rate, since such a presumption is “contradicted by” real world data showing big differences in crime rates. (See United States v. Armstrong (1996)).

Nor was there other proof of racial discrimination. Blacks were not being railroaded in the court-martial process. As the GAO noted, “Race was not a statistically significant factor in the likelihood of conviction in general and special courts-martial.”

The racial disparities in the military’s criminal justice system do not seem suspiciously large compared to the civilian justice system. In fact, the military’s racial disparities are smaller. As the GAO noted, “for prisoners with sentences of 1 year or more under the jurisdiction of state or federal correctional officials in 2016, Black males were six times more likely to be imprisoned than White males.” “Black individuals represented 26.9 percent of total arrests nationwide, but comprised 13.4 percent of the U.S. population.”

To shrink the wealth gap, the Democrats will likely support reparations. As Newsweek notes, “Democratic presidential candidate Joe Biden said” in June that “he was in favor of paying slavery reparations to African Americans and Native Americans if studies found direct cash payments to be a viable option.”

The Wall Street Journal reports that “House leaders say they expect to pass this year” a “proposal creating a federal commission to craft an official government apology and remedy plan,” and “Joe Biden” has “endorsed the bill. … The legislation faces opposition from Republicans who control the Senate. … A Democratic sweep in November elections, however, could pave the way for enactment.”