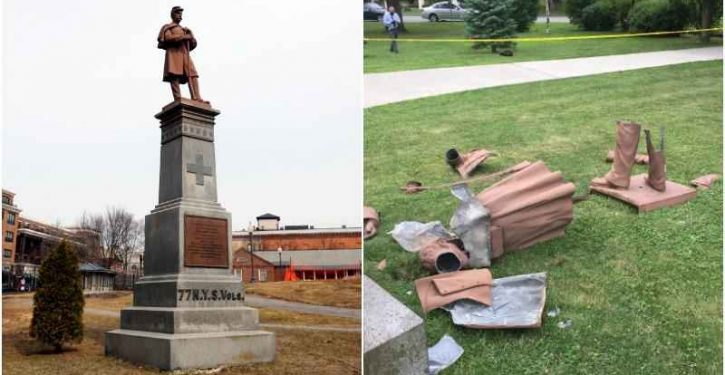 Ever since the “revolution” swung into high gear following the death of George Floyd, we have witnessed some really strange behavior on the part of those looking to “cancel” unpleasant reminders from the American landscape. Earlier this week, for example, it was a statue of the Virgin Mary that was defaced. Last night a statue of Jesus Christ was beheaded and yanked from its pedestal.

While it appears there is no let-up in sight for the blood-lust against examples of public art, questions about the anarchists’ behavior are beginning to be asked by unlikely sources. Like the New York Times, which headlined an article out today “Someone Tore Down a Union Army Statue in Saratoga Springs. Why?” Why, indeed.

“The statue,” the Times writes, “is one of dozens that have been torn down across the United States in recent weeks amid widespread protests against racism and police brutality. Many of those toppled have been monuments to Confederate soldiers.”

But the statue that stood in Congress Park was dedicated to volunteers who fought for the Union during the Civil War. In the days since it was destroyed, residents of Saratoga Springs, a mostly white college town about 30 miles north of Albany, have been calling the mayor’s office and posting on social media to express outrage and disappointment.

The Times evidently hasn’t been paying attention if they believe this is the first defacement of a statue of a “good guy.” In June, protesters tore down a statue commemorating Revolutionary war hero Tadeusz Kościuszko, who came from Poland to fight for America’s independence. Around the same time, anarchists doused a statue of Matthias Baldwin in red paint. Who was Matthias Baldwin? He was an abolitionist who endowed a school for black children.

But more inexplicable still was the desecration of another memorial to an abolitionist in Rochester, N.Y. His name? Frederick Douglass!