In recent weeks, a message parallel to “black lives matter” has emerged in the marketplace of ideas. That message is “white lives don’t matter.” The Left’s struggle on behalf of blacks is no longer geared toward equality but domination.

The attack on whiteness is nothing new. Over the past decade, Americans were told that whites enjoy special privileges, which, they were further told, should induce guilt. Talk of the U.S. making reparations to the black community has become commonplace.

What has changed in the weeks since the death of George Floyd is the intensity of the assault on whiteness. The price tag for those reparations, for example, has entered the stratosphere. Earlier this week the U.S. Conference of Mayors suggested that $6.2 quadrillion, or $151 million per descendant of slaves, be offered as reparation.

The term cancel culture has been coined to characterize the Left’s desire to rid the nation of reminders of its white founders. Signs like the one following have become accepted in polite society. The social media site Instagram has added a “mute white people” button to little fanfare.

Perhaps no better example of the anti-white message in its most extreme form are remarks by rapper Nick Cannon in which he asserts that white people are “closer to animals” and “the true savages … acting out of a deficiency so the only way they can act is evil.”

Nick Cannon says white people are "a little less," "closer to animals," "the true savages," "acting out of a deficiency so the only way they can act is evil." When does he get canceled? pic.twitter.com/vK3TBDW9i8

This is the dictionary definition of racism plain and simple. It is hate speech. And though there is no excuse for it or for remaining silent about it, we have now reached the point where it has been enshrined by a museum.

The National Museum of African American History & Culture, which is part of the Smithsonian, has published an infographic titled “Aspects & Assumptions of White Culture in the United States.”

Before turning to the graphic, it should noted that museums — from the Greek word muse — are places where objects of historical, scientific, artistic, or cultural interest are stored and exhibited. They are meant to enlighten and even inspire the visitor.

The new infographic, a copy of which follows, achieves none of those goals. Instead it enshrines bitterness and resentment by presenting assumptions — many of them wrongheaded — about whiteness, defined as the “dominant culture.” It seems to warn blacks to steer clear of the trap of internalizing aspects of white culture.

So what is white culture, according to the creators of this travesty? The graphic answers that question with a list of universal human values such as individualism, a stable family in which to raise children, empirical thinking, a work ethic, and planning for one’s future, all of which are rejected as “white” attributes. There is no mention of the 70% of black children who grow up without a father present in the home, but it almost seems that the graphic’s creators are encouraging the black community to take pride in that “alternative family structure.” 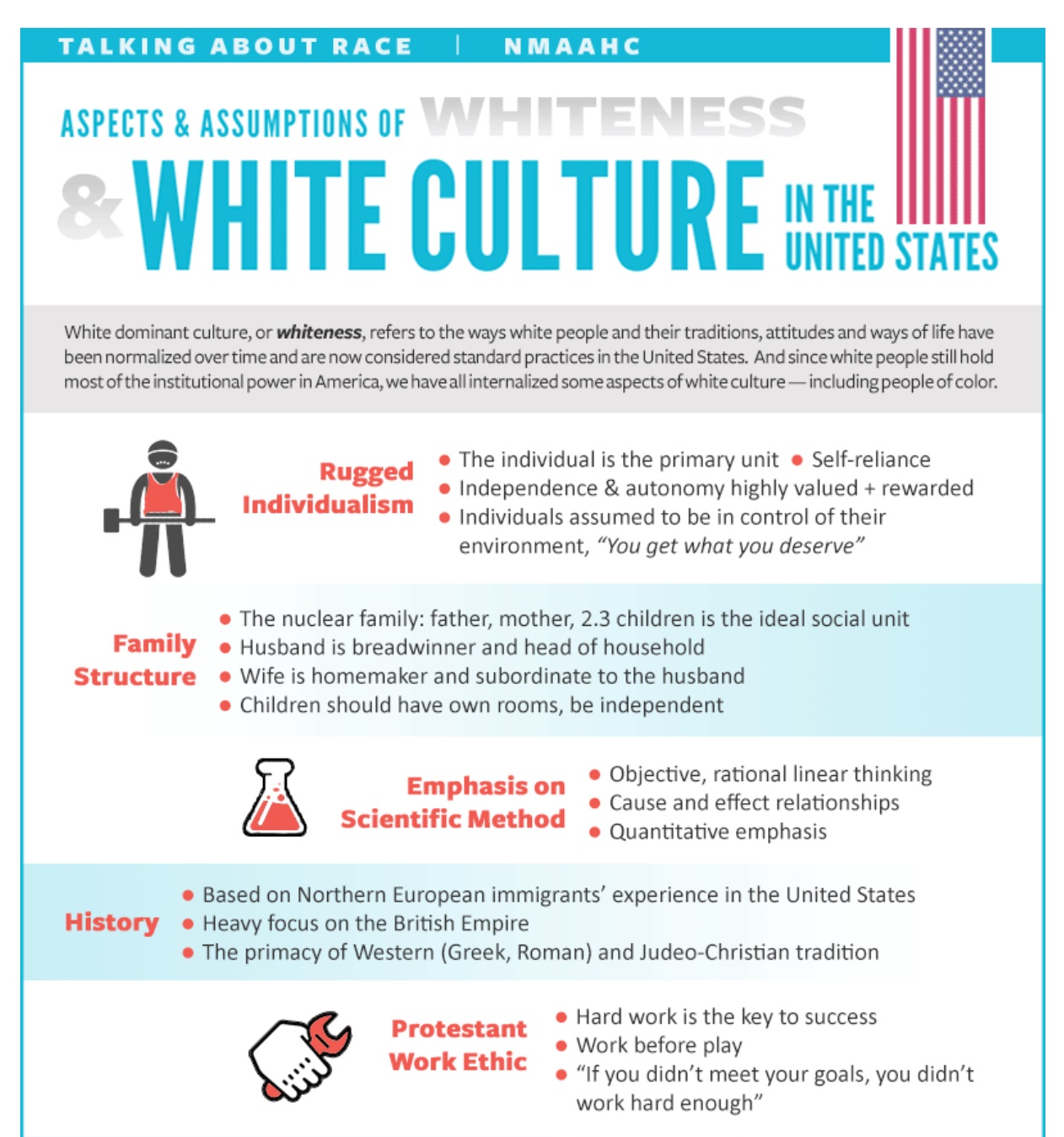 Misguided stereotypes of white people abound. The white nuclear family, for example, is painted as one in which “the wife is the homemaker and subordinate to the husband.” What century are the authors living in? Their view of white “aesthetics” is likewise straight out of the 1950s. Under that heading we learn that white people  eat only steak and potatoes and that their motto is “bland is best.” They neglect to mention that whites exclusively drive station wagons made by General Motors.

But the most harmful aspect of the graphic overall is its undervaluing of blacks in America. Blacks have made tremendous inroads in business and government in the second half of the twentieth century and current one. Should they be discouraged from striving to better their lives because they are told it as a “white” (read “evil”) thing?

Only 54% of all voters think Biden capable of debating Trump
Next Post
Bari Weiss: The picture, and the thousand words