This week, a staff editor at the New York Times, Bari Weiss, resigned from the newspaper, posting a letter online to explain why she was leaving.  She felt, in her words, that she could no longer do the work the NYT brought her in to do.  A key reason: bullying by her own colleagues at the paper, for “Wrongthink.”

Weiss is hardly a “right-wing” pundit.  More of a centrist, with some classical-liberal tendencies, she had the beat of shepherding in voices that – unlike everything else in the NYT – did not come from the lockstep far left.

Weiss’s letter has gotten a lot of attention and discussion, and for good reason.  It reveals, from the “belly of the beast,” what it’s like to work in a mainstream media editorial department today.  Some of the most widely quoted passages are the ones that illuminate the mechanisms and atmosphere of thought-enforcement.

“Twitter is not on the masthead of The New York Times,” says Weiss, for example. “But Twitter has become its ultimate editor.”

As Weiss puts it, “Stories are chosen and told in a way to satisfy the narrowest of audiences, rather than to allow a curious public to read about the world and then draw their own conclusions.  I was always taught that journalists were charged with writing the first rough draft of history. Now, history itself is one more ephemeral thing molded to fit the needs of a predetermined narrative.”

Weiss characterizes some of her experience with it:  “My own forays into Wrongthink have made me the subject of constant bullying by colleagues who disagree with my views. They have called me a Nazi and a racist; I have learned to brush off comments about how I’m ‘writing about the Jews again.’”

These are not Richard Spencer’s torch-waving mobs shouting Nazi slogans when they complain that Bari Weiss is “writing about Jews.”  Weiss’s tormentors are the narrative-keepers of the left, the ones who call everyone else Nazis and racists at the drop of a hat.

Weiss goes on to recount that “Several colleagues perceived to be friendly with me were badgered by coworkers. My work and my character are openly demeaned on company-wide Slack channels where masthead editors regularly weigh in. There, some coworkers insist I need to be rooted out if this company is to be a truly ‘inclusive’ one, while others post ax emojis next to my name.”

This is the intramural work environment she’s talking about.  This isn’t anonymous basement-dwellers trying to get attention by attacking her on Twitter.  It’s her fellow journalists.

She presents the case that this ugly, narrowly-reflexive work environment suppresses content that would actually provoke thought and useful debate.

“Why edit something challenging to our readers,” she asks, “or write something bold only to go through the numbing process of making it ideologically kosher, when we can assure ourselves of job security (and clicks) by publishing our 4000th op-ed arguing that Donald Trump is a unique danger to the country and the world?

“And so self-censorship has become the norm.”

The “4000th op-ed arguing that Donald Trump is a unique danger to the country and the world” certainly has to resonate.  A few people in America consider that a feature, not a bug.  But for those who regard it as a bug, it’s one of the largest things on today’s nightmarish intellectual landscape.

And so, “If a person’s ideology is in keeping with the new orthodoxy, they and their work remain unscrutinized.” Write that 4000th op-ed, and you keep passing Go all you want, collecting your $200 bounty every time.

“Everyone else,” however, “lives in fear of the digital thunderdome.”

The digital thunderdome discourages those annoying breakouts of independent thought.

“Op-eds that would have easily been published just two years ago would now get an editor or a writer in serious trouble, if not fired,” says Weiss.  “If a piece is perceived as likely to inspire backlash internally or on social media, the editor or writer avoids pitching it.”

But “if, every now and then, she succeeds in getting a piece published that does not explicitly promote progressive causes, it happens only after every line is carefully massaged, negotiated and caveated.”

(Remember three years ago, when “so-and-so said, without evidence, such-and-such” suddenly became standard media language?  That’s just one well-known example of the “caveating.”  That example prejudicially frames whatever may have to be quoted directly as non-credible.)

Weiss notes, on the other hand, that no caveat has ever been “appended to Cheryl Strayed’s fawning interview [published by NYT] with the writer Alice Walker, a proud anti-Semite who believes in lizard Illuminati.”

If ever an interview subject might seem to merit disclaimers, it would be an anti-Semite who believes in lizard Illuminati.  So it makes a strong impression when Weiss continues:  “The paper of record is, more and more, the record of those living in a distant galaxy, one whose concerns are profoundly removed from the lives of most people.”

Yes.  Yielding to none in my uninterested skepticism about lizard Illuminati, I have to agree.

Two things.  One, what Weiss describes in her letter is far closer to the atmosphere of a state media outlet in Stalin’s USSR than it is to the American concept of a newspaper or network news enterprise.

Two: that point and all that preceded it, courtesy of Bari Weiss, should color our perception of the “news” we are being fed every day.  We should remember at all times that the “news” is the product of a predetermined narrative, enforced with a digital bludgeon, and cheerfully accommodating of psychotic beliefs as long as they are held by individuals who adhere to the predetermined narrative.

Bari Weiss did take a few more than 1,000 words to make the point in her letter.  It was closer to 1,500 words, but let’s indulge ourselves and say that about 1,000 of them were directly on point.

Now we’re ready to look at a picture.  This is how Drudge headlines presented the aggregate, approved-narrative picture of COVID-19 on the day Weiss’s letter was published.

“COVID! COVID! It’s a chaotic jungle out there! The lurking, looming, yet oddly limp and pathetic Trump juggernaut is doing it wrong!  We’re doomed!”

And repeated in every mainstream media outlet in the West, throughout the 24 hours in question.

No.  You shouldn’t believe any part of that narrative.  There’s little hope of efficiently parsing out what may be salvageable.  So stop automatically believing.

It’s more than OK; it’s the only rational thing to do.  The narrative source you’ve spent a lifetime perceiving as “normal” is going over a cliff, embracing lizard Illuminati as the price of solidarity, and silencing a centrist Jew by calling her a Nazi.

Ignore the mainstream media, for the most part; defend each encounter with prior skepticism, and be diligent to consult other sources if you want any hope of deciding intelligently for yourself what is true. 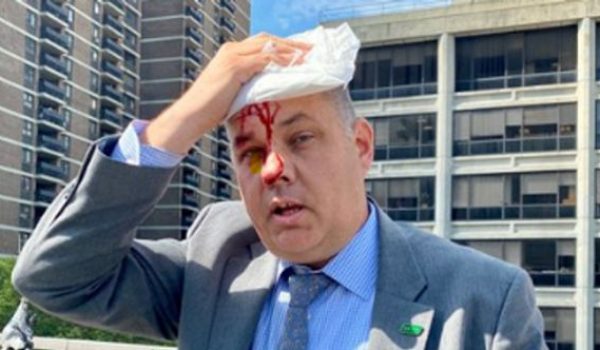