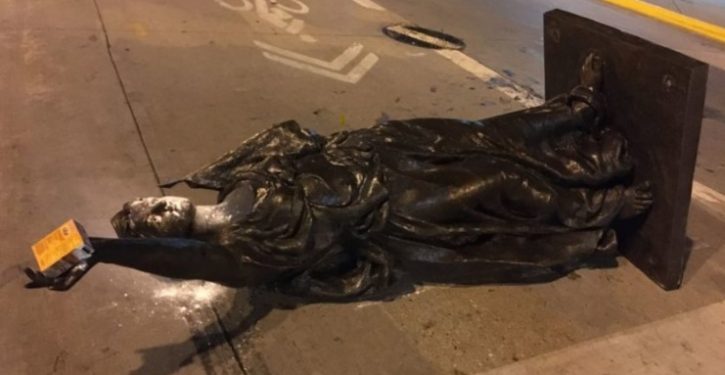 Give me your tired, your poor, your huddled masses yearning to breathe free — your discarded statues of national heroes.

While cities all over the country are dealing with epidemics of cancel culture, one small Midwestern burg, Newton Falls, Ohio, is experiencing what might be called “welcome culture.”

“A proclamation signed by the city manager of Newton Falls David Lynch has declared the city a ‘Statuary Sanctuary City’ and that all statues of Geroge Washington, Abraham Lincoln, Thomas Jefferson, Ulysses S. Grant, Patrick Henry, Francis Scott Key, Theodore Roosevelt and Christopher Columbus will be accepted from other cities that have removed them,” ABC Cleveland affiliate WEWS reports.

Whereas the great leaders of our country and Western civilization, though flawed in many ways, have risen to great achievements such as the founding of our nation, the ending of slavery, establishment and protection of our national parks, the establishment of antitrust laws to protect our citizens from overaggressive monopolization of industry, and the discovery of the New World itself; and

Whereas there great leaders as represented by beautiful and artistic statutory throughout our nation deserve to stand in a place of honor and respect as a reminder that we as Americans can achieve great things.

Nowadays nothing happens without a fight. Shortly after Lynch vowed to place the statues that are sent to the city “in a place of honor and respect to inspire greatness and achievement by all who observe them,” a petition was drafted by opponents to the plan, who declared the city manager’s proclamation “null and void.” (RELATED: Trump issues executive order to rebuild monuments destroyed by protesters: The Left pounces)