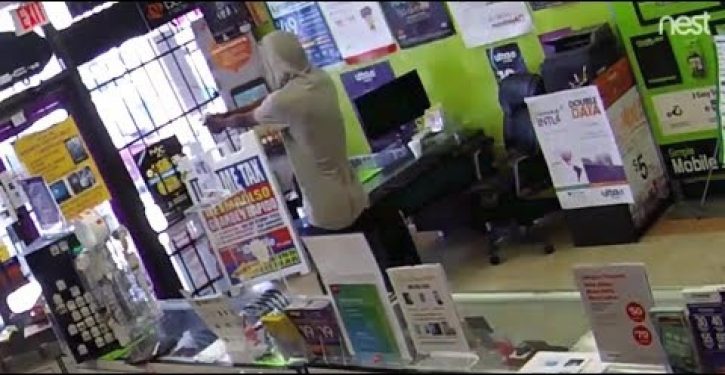 Subtitle this one “the three stages of grief, armed-thug style.”

According to NewsTalk 1290, he entered a cell phone store in the southwest area of the city, armed, and walked around the counter to demand cash. “Open it,” he can be heard repeating to an unseen employee.

Initially she stood her ground and refused.

Then she had a better idea: She shepherded the other occupants of the store, which included another employee and a a customer pushing a stroller, out the front door, apparently fleeing to safety. The thief is left to his own devices.

But when it was time to make his getaway, he discovers a bitter reality. There is, in the words of the playwright, “no exit.” Upon exiting, the store’s owner locked the door from the outside, trapping the bandit inside.

Hit initial reaction to his predicament — Stage 1 — is anger. He utters a profanity, which is bleeped from the video. He then tries shooting his way out, but no dice. After firing six rounds into the door, to no avail, he tries flinging himself at the door and kicking it. He manages to dislodge a sign hanging from it, but the door itself won’t budge.

That is when Stage 2, bargaining, sets in. He pleads with the owner to unlock the door, even kneeling down in a gesture of prayerful contrition. “Please,” he begs over and over, “I’m sorry.”

Finally, Stage 3 — acceptance — takes over. He raises his hands as the police arrive. The order him to “get on the ground!” He complies.

The thief, John Bell, was sentenced to five years in prison.

White wokeness
Next Post
Cartoon of the Day: Approach-avoidance 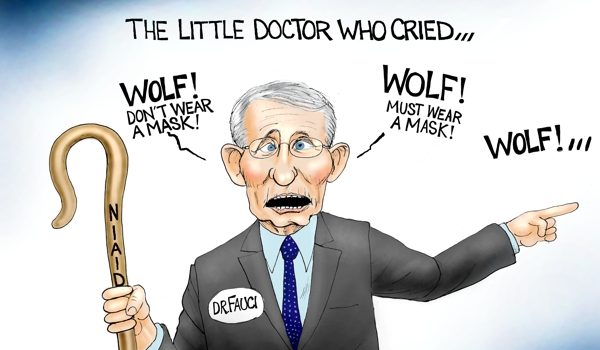