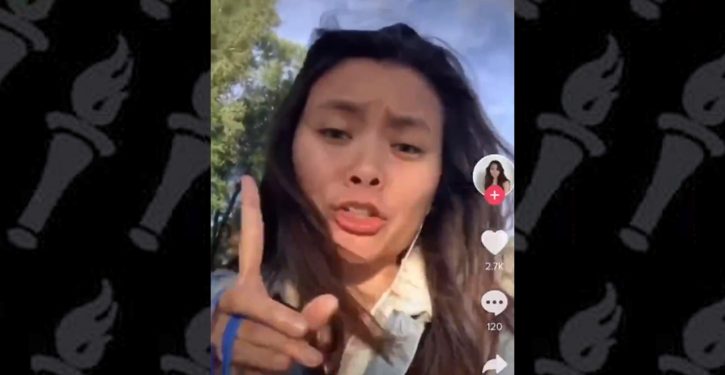 Threatening to have an impact. TikTok video via Twitter

We first saw her in a TikTok video on Twitter on Tuesday, breezily threatening to stab conservatives who said “All lives matter.”  She was a senior at Harvard at the time.

Unfortunately, as she reveals in a follow-on video, her employer coming out of Harvard – until this week – was Deloitte.  The global accounting firm, whose business depends on the highest standard of fiduciary integrity, apparently didn’t find her continued employment compatible with its mission and reputation.

“It sucks,” she says, “but it doesn’t suck as much as systemic racism.  And I’m not going to stop using my platform to advocate for it.  [She actually means advocate against it – Ed.]  And I’m sorry, Deloitte, that you can’t see that.  That you are cowardice [sic] enough to fight somebody who’s going to make an indelible change in the world, and is going to have an impact.”

This wasn’t a case of “cancel culture” kicking in over absurdities from someone’s adolescent years.  This was the case of a Deloitte employee posting video of herself as an adult making death threats to people.

She blames her job loss on the racist conservative Trump supporters who picked up her TikToks and shared them, highlighting the point that she was threatening to stab people.

Well, you did say you were going to stab anyone who said all lives matter, and now you’ll have time to do that! So, hey, look on the bright side… pic.twitter.com/JoR4oyp0Kz

It’s hard to decide what is more pathetic here.  Her sweeping declarations, made entirely by stringing buzzphrases and propaganda words together, are actually top contenders.  She can’t talk without sounding like a Hillary Clinton T-shirt slogan.

But the most disturbing thing may be that she doesn’t even understand what just happened.  She thinks some conservative Trump supporters “got her fired” because they were upset with her stance on racism, when the reality is that her employer was appalled by her threat to stab people.  The poor young woman hasn’t been educated; she’s been indoctrinated.

As Mike Doran of the Hudson Institute points out, her inculcated M.O. is “Exhibitionism at every stage. Social media has erased the line between public & private, & destroyed civility.

She lost a job b/c she threatened on TikTok to stab conservatives. Now she cries into her camera. Exhibitionism at every stage. Social media has erased the line between public & private, & destroyed civility. How do we reclaim our culture? pic.twitter.com/L0hdxQHR7k

We wish her the best in her struggle to rewire her cognitive synapses.  She seems bright and articulate, but what a woeful handicap her upbringing and schooling have saddled her with.

The good news would seem to be that if anyone was on the fence on this question – you can cross Harvard off your list.  If you want a real education, that is.