A loyal Republican friend of mine in a crucial swing state is conflicted about voting again for Donald Trump. She is upscale, educated, and turned off by his behavior, which she says has diminished the presidency. Worse, she believes that Trump, if reelected, will be “unstoppable” and turn into a “dictator.”

Conversely, my friend is equally concerned that voting for Joe Biden will usher in an era of socialism, defunding the police, and other facets of an overarching leftist agenda.

Frustrated, she asked, “What am I supposed to do? Who should I vote for?” (A second 2016 Republican Trump voter I know, also unhappy with the choices, offered this solution: Write in Ohio Gov. Mike DeWine.)

Another GOP friend is not conflicted and plans on voting for the former vice president as an anti-Trump alternative. “I love my country,” she said, “but I am afraid that Trump is destroying it.” Here is how this friend justifies voting Democrat for the first time: “Our country needs to get back to normal,” she told me, assuming Biden will win. Then, in 2024 she will again support the Republican nominee “who will win back the White House.”

Admittedly, these three Republicans “chipping away” at Trump’s base are outside the norm. Most of my friends and associates staunchly support reelecting the president.

I also know that some Republicans turned off by Trump keep it to themselves, fearing backlash from loyalist friends. Conversely, there are Democrats who quietly support the president. Perhaps these opposite outlier voters will cancel out each other.

Nonetheless, with Trump running a campaign that, by design, appeals only to his base, even small numbers of disgruntled GOP voters, especially in battleground states, could be decisive.

Note that in 2016, Trump won four states totaling 75 electoral votes with margins of less than, or just over, one percentage point. Could we see a repeat performance in November? For the record, the states were Florida (29) Pennsylvania (20), Michigan (16), and Wisconsin (10).

My Biden-voting Republican friend is dismayed that all her undaunted Trump-supporting friends “don’t believe any 2020 polls showing Biden in the lead.” (This “Trumpian” anti-poll attitude was discussed in my May 2019 RealClearPolitics piece headlined “ ‘Don’t Believe the Polls’ Mantra Could Hurt the GOP.”)

For the red MAGA-cap-wearing faithful, maligning unfavorable poll results is an ongoing default position that’s morphed into a political “comforter” because, they repeatedly say, “all the 2016 polls were wrong.”

Unsure what to believe, my friend asked me, “Were all the 2016 polls wrong?”

First, I reminded her that Hillary Clinton won the popular tally by close to 3 million votes — 65.8 million to Trump’s 62.9 million. Therefore, the polls predicting Clinton’s national victory were not “wrong.” (That info-nugget made my friend laugh. She honestly thinks loyalists “forgot that Trump lost the popular vote.”)

Second, I suggested that the genesis for “all the polls were wrong” was the four key contested states responsible for Trump’s victory — though they were won by such close margins that such a claim is itself wrong (and has been exaggerated by Trump bravado). But I made a mental note to research the pertinent 2016 final polls. What follows are my findings.

Interestingly, the polls with likely voters incorporated into the final averages had margins of errors (plus or minus either way, applied to both candidates) ranging between 2.5 and 3.6 percentage points.

The bottom line is that poll interpretation is tricky, and the margin of error is usually underplayed by the media and ignored by voters. That was especially true with the 2016 “blue wall” state polls, as we will briefly examine below, starting with Pennsylvania.

The final RCP poll average in the Keystone State showed Clinton leading Trump by 2.1 percentage points — 46.8% to 44.7%. But Trump famously won by a 0.7-percentage-point margin — 48.2% to Clinton’s 47.5 %. Dig deeper and you might discover that Trump winning Pennsylvania should not have been so surprising.

In fact, the top poll incorporated into the RCP average was from the Trafalgar Group, with an (R*) signifying it was a Republican polling organization. Remarkably, Trafalgar showed Trump ahead by 48% to Clinton’s 47%, with a 2.7-percentage-point margin of error. The other two top polls included in the average with likely voters had Clinton either winning by six points or tied with Trump, along with 4.4 and 5.5 point margins of error.

Leading to the historic election night “upset,” the national media’s “mistake” was the expectation that Pennsylvania would remain blue for Mrs. Clinton — as it had since 1992 when Mr. Clinton won the state with its then-23 electoral votes.

Michigan, why the surprise?

Turning to Michigan in 2016, the final RCP poll average showed Clinton leading by 3.6 percentage points. But Trump won by the slimmest 0.3-percentage-point margin of 47.3% to 47.0%. Kudos to Trafalgar Group’s poll that had Trump leading by two percentage points, 49% to Clinton’s 47%, with a 2.8 point margin of error. Again, why the big election night surprise? Answer: The media failed to do its homework. When applying the last Michigan poll’s margin of error, the state was a toss-up.

Attention anti-poll Trumpers: Exhibit A is Wisconsin, where you are fully justified in singing the “all the 2016 polls were wrong” song.

The last RCP poll average had Clinton leading Trump by a whopping 6.5 percentage points — 46.8% to 40.3%. Shockingly, Trump pulled off a narrow 0.7-percentage-point margin of victory, winning 47.2% of Wisconsin voters to Clinton’s 46.5%.

However, failed Wisconsin 2016 polling does not justify the 2020 GOP’s prevailing attitude denigrating all unfavorable Trump poll results. As I told my friend, polls are only a snapshot of a moment in time. Furthermore, the margin of error and whether the poll sampling consists of likely vs. registered voters should be better explained when polls are reported as “breaking news.”

Lastly, we look at 2016 Florida, where the pollsters were on target.

Where we are now — Here we go again?

But that was then, and this is now, with polling looking disastrous for Team Trump.

Across all RCP averages reflecting national and state polling, the president is falling behind. In key demographic and gender groups, cross-tabulations show Trump losing women and white voters by percentages that spell inevitable defeat. This week’s New York Times/Siena College poll, generating countless headlines, shows Biden with “a nine-point advantage across six key states, including leads of at least six points in each of them.”

Nevertheless, in political dog years, November is still eons away given the fluid, calamitous, anything can, and will, happen pandemic state of our riotous nation.

Election uncertainty and instability crystallized for me when I read some eye-popping polar opposite quotes from data guru Nate Silver. First, he said, a “Biden landslide is possible,” followed by, “Trump could absolutely win reelection.”

Complementing that assessment, Trafalgar Group’s latest Michigan poll separates Biden and Trump by just one point, but the NYT/Sienna poll has Biden up by 11! Then the RCP Michigan poll average shows Biden ahead by 8.6 percentage points. So here we go again!

And that news brings us back to my perplexed Republican friend caught in the middle. She fears both candidates and plaintively asks, “Who should I vote for?” 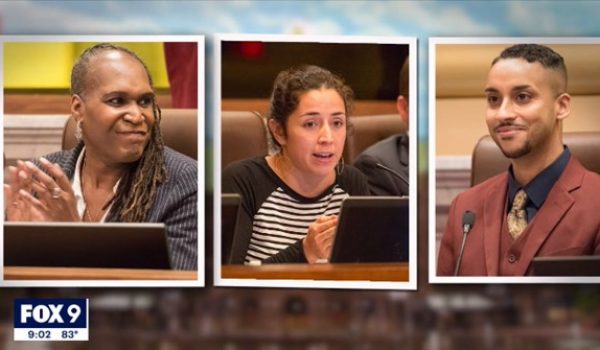