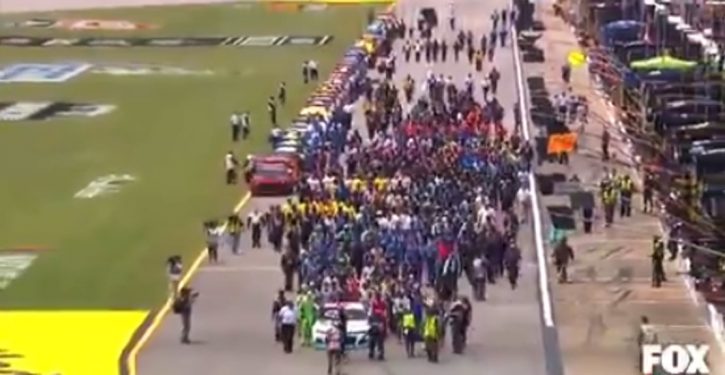 Bubba Wallace is pushed to the front of the grid by the NASCAR family on 22 June 2020. Fox NASCAR video via Twitter

I sure wish they’d post an image of the darn thing so we could determine if it’s even a noose.  A noose is tied with a special slip knot so the loop can be expanded to get it over the head, and will then hold (rather than flopping open) as the victim’s weight pulls on it.  Other knots that create loops in the end of a rope don’t perform that way.

At any rate, our story to date is that way back on 21 June, it was averred that a noose had been found in the garage assigned to race driver Bubba Wallace at Talladega, where the 500 was run on Monday.  Wallace is the only black driver on the NASCAR circuit, and this was immediately taken as evidence of race hatred by someone involved in NASCAR.

Proclamations and lamentations ensued.  Readers no doubt saw video of a vast walk in solidarity with Wallace, with drivers pushing and crew members escorting him to the front of the grid on Monday.

The FBI was called in to investigate the rope found in the garage, reported to be a “noose.”  Reportedly, the FBI was able to spare 15 special agents for this task.  That may explain why it took them about 48 hours to determine that the rope had been in the garage (number 4 at Talladega if you’re keeping track) since at least October 2019, and could not have been placed there for Wallace because the first time he was ever assigned garage number 4 was just prior to the GEICO 500 at Talladega on 22 June 2020.

FBI statement “On Monday, fifteen FBI special agents conducted numerous interviews regarding the situation at Talladega Superspeedway. After a thorough review of the facts and evidence surrounding this event, we have concluded that no federal crime was committed.” pic.twitter.com/SKRQEFeWL9

The FBI doesn’t seem to have ruled on the nature of the rope and its knot.  However, sundance at Conservative Treehouse did a bang-up job analyzing the pull-down ropes that hang from every garage door at Talladega, as shown in a video walk-through done a few years ago.  Each rope has a fair-size loop handle on the end of it, the kind you poke your fingers through and grab onto to pull down the garage door.

There are no good close-ups of the pull-down ropes on the garage doors, and there’s never been a photo provided of the supposed “noose” found this past weekend in number 4.  Sundance’s theory is that the “noose” is actually just one of the garage door pull-down ropes.  The FBI conclusion suggests that as well.  In the absence of more details, that seems pretty serviceable as an explanation.

If the rope that ate Talladega this week was one of the garage door ropes, it looks to me, from the one we get the best glimpse of in the old video walk-through, like the loop is made with a Bimini twist knot.  That’s common when you need your loop to remain the size you’ve made it, and hold strongly at that size.  In other words, it’s not a hangman’s slip knot.  The loops on the garage door ropes aren’t big enough to function as nooses.

Among 15 FBI special agents, there was probably at least one who understood such things just by looking.  I doubt we’ll hear any more from the FBI, however.  Meanwhile, Bubba Wallace had his solidarity moment before the race.  As Cortney O’Brien says at Townhall, Wallace seems to have sincerely appreciated it.  There’s not much reason to belabor that a whole lot further, except to say that the cynicism engendered by repeated claims of “race” attacks that don’t pan out really eats away at good feeling and common sense.

Ryan Blaney came in first, so congratulations to him.  Wallace was 14th on the day.  (Wallace is 21st out of 49 in the overall Cup Series standings.)  Wallace did go on air with Don Lemon at CNN and insist the rope thing had to be a noose.

"I've been racing all of my life, we've raced out of hundreds of garages that never had garage pulls like that. … It's a straight up noose."

Wallace also went on The View to discuss the noose.

.@BubbaWallace on those who believe the noose incident was staged: “It’s simple-minded people like that, the ones that are afraid of change, they use everything in their power to defend what they stand up for… instead of trying to listen and understand what’s going on.” pic.twitter.com/FikMntalwO

There doesn’t seem to be a lot more to make of this story.  After Jussie Smollett, the recent not-a-noose in Oakland, and other similar incidents, sensible people will be even less inclined now to give credence to the next report of a “race hatred” attack with dubious props offered as evidence.

Controversy grows over Trump’s upcoming Arizona rally
Next Post
In case Biden thought election was going to be a cakewalk, Dems are airing their doubts, concerns