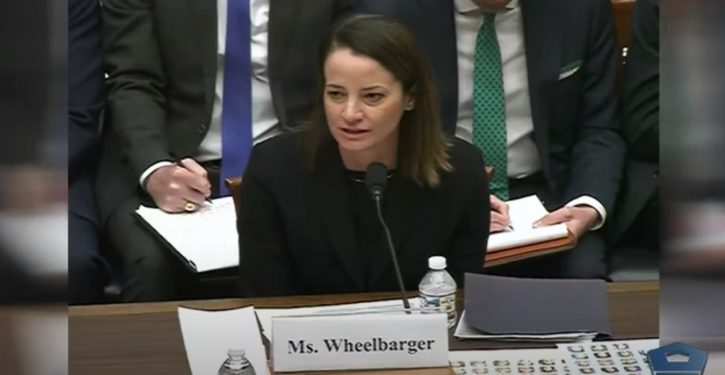 We can’t trust themed reporting on these events from the mainstream media, so we have to make the best of the basic information to try to understand them.

A senior official of the Department of Defense is resigning.  Her name is Kathryn Wheelbarger, and she has been the Principal Deputy Assistant Secretary of Defense for International Security Affairs since 2018.

Reuters had a typical treatment of her impending departure, emphasizing that “critics accuse Trump of seeking ‘loyalists’” and implying that that’s why Wheelbarger is leaving.

And that may be why she’s leaving.  But it’s a good question why Trump shouldn’t expect his senior officials to carry out his policies rather than dragging their heels on them or actively sabotaging them.  (It’s also significant that Wheelbarger isn’t clutching at a moment in the spotlight to air grievances at the Trump administration.)

Wheelbarger doesn’t seem to have a reputation for being a Trump opponent or an outright saboteur.  But Washington itself is making it nearly impossible for anyone to respect and carry out the president’s policies, without being deemed a Trump stool pigeon who needs to be harassed out of her job.  It’s as likely that the “deep state” is the party that requires a loyalty oath, if reluctance toward such an oath is behind Wheelbarger’s resignation.

Wheelbarger was nominated in February to become Undersecretary of Defense for Intelligence and Security, the number two intelligence job in the DOD hierarchy.  On 12 June, the White House announced that a former special forces officer, Bradley Hansell, would be nominated instead.  According to Defense News, Wheelbarger’s nomination “had stalled out since” February, “reportedly over a view from Trump administration officials that she is not sufficiently loyal to the president.”

The news that she would be resigning from her current position was reported on 18 June.

A couple of items from her background are informative. They go beyond the media’s focus on her stint in the mid-2010s working for John McCain on the Senate Armed Services Committee staff.  (Her c.v. up through the SASC job has an old-consensus Republican feel to it; she worked on the George W. Bush campaign in 2004, then as counsel at the Department of Homeland Security under Michael Chertoff, counsel to Vice President Dick Cheney and his staff through 2009, and on the staff of the House Intelligence Committee under former Chairman Mike Rogers (R-MI).)

Not showing up for Schiff

The first informative item is an all-but-memory-holed event in October 2019.  Adam Schiff was holding his closed-door House Intelligence Committee hearings on Ukraine at the time, and for several days in advance, news outlets listed Wheelbarger as expected to testify on 30 October 2019.

She was to be one of only two DOD officials to speak to Schiff’s committee.  The other was Laura K. Cooper, director for policy on Russia, Ukraine, and Eurasia in the Office of the Under Secretary of Defense for Policy.

Ms. Cooper, recall, turned out to have a professional biography overlapping Schiff’s star witnesses (each of them involved in funneling USAID money to Soros projects in Southeastern Europe in the 1990s and early 2000s), and including path-crossing interludes with half the key figures of Spygate.  Cooper’s testimony on 23 October was also the event enlivened by Republicans “storming” the SCIF to gain access to it, because Schiff had set her deposition up to exclude them.

Schiff thus sought to keep non-committee Republicans from being able to sit in on testimony they were cleared for and would normally have had access to, from one of only two scheduled witnesses from the DOD.  DOD witnesses were significant, moreover, because the issue the “Ukraine” problem turned on was about military aid to Ukraine.  But Cooper’s testimony was of particular concern because she had been instructed not to testify, and did so anyway.

And remember, this testimony was preliminary to a likely impeachment proceeding.  Trying to exclude any Republicans from it was inexcusable.

These details could only add freight to the inherent sensitivity of Wheelbarger’s expected testimony the following week.  House Democrats had reportedly demanded her testimony, and Washington media updates had her on Schiff’s calendar up through 30 October.  That day, however, Axios noted briefly the following: “Acting Assistant Secretary of Defense for International Security Affairs Kathryn Wheelbarger, who was initially scheduled to testify on Oct. 30, is no longer expected to appear.”

Wheelbarger’s canceled appearance sank without a trace – which is actually interesting, given the media’s propensity to flog it as a theme when administration officials failed to show up.  It comes across as a curious act (by the media) of mercy or prudence of some kind, though perhaps it was just luck for Wheelbarger.

At any rate, after her nomination to the USD Intelligence & Security post, Politico offered this vague explanation:  “Wheelbarger also declined to testify before Congress during the impeachment inquiry, [an] official said, explaining that she and her lawyer convinced congressional staff that she would not be able to provide additional information for the case.”

Again, the noteworthy aspect here is that Politico was not working overtime to frame Wheelbarger’s failure to testify as suspicious.

A walk with a cloud

In addition to this ambiguous event, Ms. Wheelbarger had one foray outside of government employment since 2004, and it occurred from February to July 2017.  She was Vice President for Litigation and Chief Compliance Officer (i.e., regulatory compliance) at government contractor CSRA (since bought out by General Dynamics).

It was during this period that CSRA obtained a half-billion dollar contract with the DOD to provide IT cloud services for the Pentagon.  If you’ve been following this story with us from the beginning, you understand that triggers a dropdown menu of Spygate boxes being checked.

CSRA (now GDIT) is in the interesting position of having “strategic alliances with Amazon.com Inc’s AWS cloud services, Cisco Systems Inc, Microsoft Corp and Oracle Corp, among others” – the others, as the linked article indicates, now including Alphabet’s Google Cloud.  Indeed, a CSRA press release in August 2017 touted the company’s pioneering test for the Navy of a human resource management system to be operated on the Amazon Web Services cloud.

By August 2017, Wheelbarger was at the Pentagon working International Security Affairs.  The timing of these moves is probably nothing more than coincidental with a significant development in Spygate: former NSC staffer Ezra Cohen-Watnick’s departure for a job with Oracle, where he unearthed much of the information underlying Ric Grenell’s satchel-full of “Gotcha!” on who was spying on the Trump team.  Cohen-Watnick, a Michael Flynn addition to the NSC staff, was edged out by Flynn’s successor in the summer of 2017 and took the Oracle job that August.

But there’s an off chance it isn’t coincidental.  It could cut either way, in that case; I’m inclined to read Wheelbarger as a non-Swamp creature who’s been able to operate in the Swamp up to now without serious conflict, but who might not be suited to do real bureaucratic battle with the forces wracking the U.S. intelligence community (some of whose key threads run through intelligence systems).

The USD/I&S at the Pentagon has to be able to dominate the sharks and alligators.  The intel community has been the wretchedest hive of scum and villainy sniping at the Trump presidency, short of the mainstream media themselves.  Trump appears to see Bradley Hansell as the person with the needed skills.

The whiff I get from Wheelbarger’s position is like the one attending Russell Travers, the Acting Director of the National Counterterrorism Center who quietly left government service in March 2020.  Wheelbarger probably knows things about what the deep state has been doing.  My guess is that she’s not complicit in an entangled sort of way.

But Washington isn’t hospitable to people – especially those in key positions – who just want to do a professional job and serve the current administration fair and square.  When Trump is “accused” of loyalty demands, that’s the Swamp howling that he won’t accept being stymied by bureaucrats who’ve taken a contrary loyalty oath to the D.C. establishment.

Perhaps being caught in the middle of that battle just isn’t a good fit for Kathryn Wheelbarger.  This is a good reminder that little is proceeding as usual in Washington, and much of what we see is the faint outline of a titanic struggle being waged against the duly-elected president’s administration and policies.  The forces arrayed against Trump are trying to create as much friction as possible, and as much of a sense of chaos and dark doings.

We can’t forget that this is the environment in which many honest people are trying to get things done at the State, Defense, Justice, and Treasury Departments – along with the NSC and ODNI – where so many of the breakdowns seem to be.  Theirs is not a simple task.  I wish Ms. Wheelbarger well.