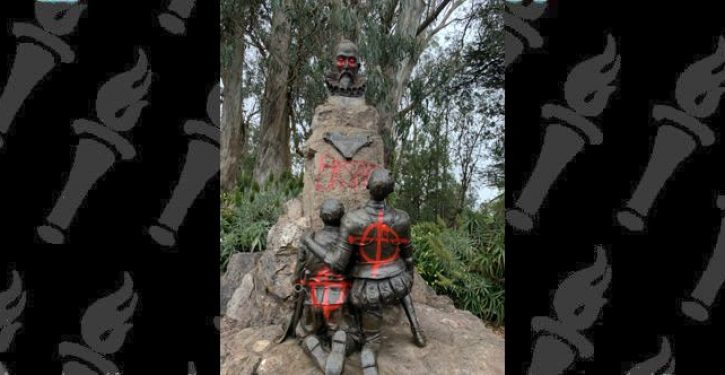 In this sculptural tribute to the author, the characters of Don Quixote and Sancho Ponza gaze up at their creator (Image via Twitter )

Early on the mission of the angry Left was to tear down statues of historical figures who had oppressed minorities. Taking the initiative to destroy works of public art was still a crime, mind you, but at least the topplers and defacers could  claim they were carrying out their acts of desecration in the name of justice.

Weeks ago, they lost sight of their “principles” and began destroying sculptures of the “good guys” — of people like Matthias Baldwin, an abolitionist, and Ulysses S. Grant, the Union general who had defeated Robert E. Lee and his Confederate troops to win the Civil War.

Over the weekend, the mob reached a new nadir. The Marin Independent Journal reports that vandals in San Francisco’s Golden State Park indiscriminately tore down or defaced every statue they could find. This included Spanish writer Miguel de Cervantes, the author of “Don Quixote.” But as several people have noted on Twiter, Cervantes was himself a slave:

Cervantes, famously, was a slave himself- captured by Barbary Pirates, and enslaved in the galleys of Algiers for five years before being ransomed pic.twitter.com/elEpGjexVT

But that’s not the half of it. The article goes on to quote San Francisco Mayor London Breed as saying:

Every dollar we spend cleaning up this vandalism takes funding away from actually supporting our community, including our African-American community. I say this not to defend any particular statue or what it represents, but to recognize that when people take action in the name of my community, they should actually involve us.

In the meantime, you have to wonder who will appear next on the anarchists’ radar. Will it be abolitionist Frederick Douglass, who was also a slave like Cervantes. As Hans Bader writes, Douglass had words of high praise for Ulysses Grant, which should place his statue in Harlem in the cross hairs by reason of guilt by association. A statue of the prophet Muhammad gracing the Appellate Division Courthouse in New York City would have been a perfect target had the city not removed the statue on its own sixty years ago out of deference to Muslims, for whom depictions of the prophet are an affront. According to the BBC Muhammad “bought, sold, captured, and owned slaves.”

UN comes out in support of Antifa
Next Post
At Tulsa rally, Trump says silent majority ‘stronger than ever’