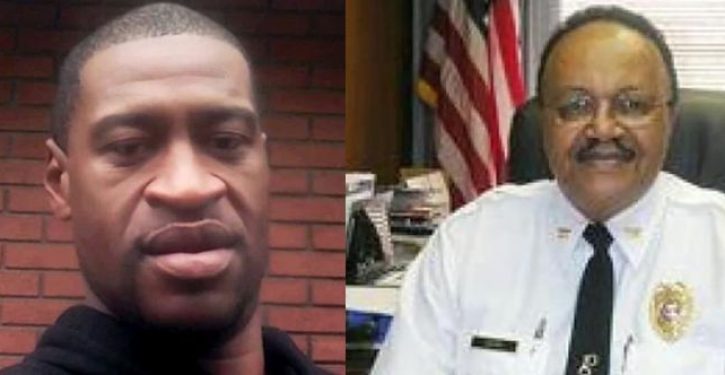 Why does the Left insist on elevating minority victims to hero status while ignoring true minority heroes?

The memorial service held for George Floyd, the African American who was slowly killed by a Minneapolis police officer as three fellow cops looked on, was televised by all three broadcast networks as well as by C-SPAN, CNN and Fox News.

However, the president of the Minneapolis police union said Floyd’s darker past should also be remembered and placed in context with the riots that have erupted over his death. “What is not being told is the violent criminal history of George Floyd. The media will not air this,” police union president Bob Kroll told his members.

Floyd served five sentences for a variety of offenses, including theft with the use of a firearm and a number of drug charges. The most serious was an incident where he forced his way into a pregnant woman’s home, placed a gun at her belly, and demanded money and drugs. He served five years for that offense, and was released in 2014.

Friends said he’d turned his life around after that, and his family remembered him as a loving brother and uncle. However, both autopsies revealed that Floyd had fentanyl and methamphetamine in his system, suggesting that he was still struggling.

Despite his imperfections, it should be remembered that he was also a victim of overly aggressive police tactics by a cop who’d been in trouble before and should have been discharged long ago for prior incidents where he used excessive force.

What’s questionable is the media coverage and the lofty group of attendees honoring him for no reason other than his victimhood. There’s no honor in being a victim.

Such a tribute would have been more fitting for another African American who was killed this week. David Dorn, a 77-year-old retired St. Louis police captain, was gunned down early Tuesday morning while guarding a pawn shop for a friend.

Unlike Floyd, Dorn led an exemplary life, dedicated to serving and protecting others. In addition to rising to the rank of captain in the St. Louis force, he also served as the police chief in nearby Moline Acres, the St. Louis Post-Dispatch reported.

Four active duty St. Louis officers were also shot at about the same time — during the Monday night and early Tuesday morning rioting, looting, and mayhem that took place in memory of George Floyd.

Both killings were recorded. In Floyd’s case, by onlookers begging for the officer to take his knee off Floyd’s neck and chest.

In Dorn’s case, the retired cop’s killers did the recording and posted it to Facebook Live as a “trophy” video.

What happened to Floyd was horrifying and should never have occurred. But it was also an aberration. Despite the narrative promoted by the media and Democrats in Congress, no one is out to get minorities.

Celebrated black economist Thomas Sowell observed this week that racism is primarily fostered by the Left. “Racism is not dead,” he tweeted. “But it is on life-support, kept alive mainly by the people who use it for an excuse or to keep minority communities fearful or resentful enough to turn out as a voting bloc on election day.”

The most disturbing thing about Dorn’s death was that he was callously murdered while protecting a friend’s store from looters – the very looters who ostensibly acted in the name of Floyd. Yet there was no nationally observed memorial for David Dorn.

America is missing the opportunity to honor a real hero by favoring Floyd over Dorn in media coverage. A group of about 100 friends, family and total strangers marched Thursday in both Dorn’s honor and in a plea to end the violence prompted by Floyd’s killing, according to KMOV4 News.

But there were no governors, congressmen, or mayors, sports figures or celebrities in attendance. There was no ABC, CBS, NBC, CNN or Fox News. There was no national figure to deliver a eulogy.

It was just regular folks who can distinguish true heroism from victimhood.

Speaking behind Floyd’s gold casket, Sharpton ended his eulogy by addressing the deceased: “Go home. Get your rest, George. You changed the world, George.”

In truth Floyd didn’t change a thing — all he did was to die. Dorn, on the other hand, dedicated his entire life changing his little part of the world for the better.

Blacks call police for help 7 times as frequently as whites and other inconvenient truths
Next Post
With little social distancing, Whitmer marches with protesters, takes a knee