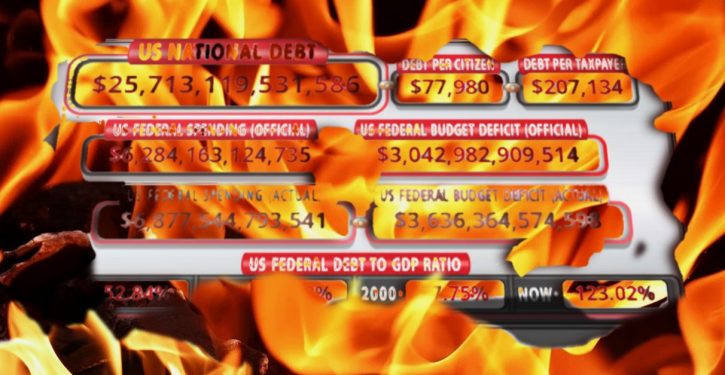 Today, our national debt — defined by the clock website as “the face amount or principal amount of marketable and non-marketable securities currently outstanding” —  is $25.6 trillion but projected to be $45.3 trillion by 2024.

For comparison, in a January 2019 RealClearPolitics piece also referencing the National Debt Clock, I noted then the total was $21.9 trillion and projected to be $25.6 trillion in four years. In only 16 months, our national debt increased by $3.7 trillion, matching the 2023 estimate!

Worse, even before the COVID-19 pandemic required the Treasury Department to borrow $3 trillion from April to June to prop up the economy — the government was “nearly $25 trillion in debt and projected to spend $1.1 trillion more than it was going to collect in taxes,” according to USA Today.

But remember, while President Trump repeatedly bragged that we had “the greatest economy in the history of our country,” rising national debt and budget deficits continued unabated. Piling on, here is another disturbing data point from the aforementioned RealClearPolitics piece headlined “Unfunded Govt. Liabilities — Our Ticking Time Bomb”: Those liabilities are future payments the U.S. government owes and promises its citizens but without the funds to fulfill those obligations. In January 2019, liabilities were unfunded to the tune of $122 trillion; today they’ve grown to $147.7 trillion. Moreover, the Debt Clock’s four-years-out 2023 projection of $157 trillion has increases to $188 trillion in 2024.

We should all gasp as this “ticking time bomb” has gone nuclear. (Note to aging baby boomers: The unfunded liabilities are all your fault.)

Even though the data is predictably gloomy, I consider U.S. Debt Clock.org a “no spin zone.” The organization’s stated purpose is “to inform the public of the financial condition of the United States of America.” Also offered is the following disclaimer: “U.S. Debt Clock.org is not associated with any government agency, or funded by or affiliated with any politically active party, organization or lobbying group.” That is reassuring these days when facts and figures appear to be relative, based on one’s party affiliation.

Most illuminating is the Debt Clock’s “time machine” — a feature that goes back to 1980 and ahead to 2024. Through the machine, one sees an accumulation and acceleration of national debt, illustrating a “great” nation that increasingly cannot live within its means.

Displayed below is a 40-year progression with trillions of national debt topped by the harrowing 2024 projection.

But do these trillions of debt even matter? After all, we had the largest and strongest economy in the world before the COVID crisis, despite $25 trillion of debt. The U.S. also has the dubious distinction of being the greatest debtor nation in the world — currently owing $4.6 trillion more than the value of the annual gross domestic product, according to the Debt Clock.

Perhaps the Debt Clock is a little too pessimistic about 2024? Well, maybe not. Here is a reality check from the Congressional Budget Office projection report dated May 19:

“CBO estimates that real gross domestic product will contract by 11 percent in the second quarter of this year, which is equivalent to a decline of 38 percent at an annual rate, and that the number of people employed will be almost 26 million lower than the number in the fourth quarter of 2019.”

How quickly our national economy reverses that unprecedented, steep decline is the question of the year or maybe the decade. Meanwhile, the Federal Reserve is creating trillions of dollars out of thin air to strengthen the credit markets, avoid economic collapse, and deal with the COVID-sparked “depression.” How can the Fed do that with trillions it created?

An abbreviated answer is that nations like Japan and China buy our debt in the form of U.S. Treasury Securities, believing in “the full faith and credit of the United States” to meet its debt obligations. Last month in Forbes, George Calhoun explained the concept:

“Today, in the language of American finance, FFC [Full Faith and Credit] signifies the absolute guarantee underpinning the borrowing power of the Federal government. In the 19th century this guarantee was less than absolute. But since America’s rise to financial hegemony after World War II, no one seriously questions the U.S. government’s guarantee to honor its debts.”

Therefore, as long as there are buyers of the Fed-created trillions of debt who believe that the U.S. will honor its debts, then the proverbial printing presses can continue to run at warp speed in good times and bad.

Subsequently, the Debt Clock will keep ticking while some leaders talk about spending MORE — for free health care, guaranteed income, and education, financed out of thin air. A trillion here, a trillion there — it’s a new mindset where the national debt no longer matters. And that concept holds as long as the U.S. remains the No. 1 superpower both economically and militarily. If and when that changes, watch out.

But, as long as U.S. Treasury bills and the dollar are unchallenged as the stable basis of global financial markets, the “full faith and credit of the U.S. government” will remain our nation’s most powerful asset, fiscal weapon, and problem solver.

So for now, I will join my fellow Republicans who once were concerned  about such foundational GOP concepts as fiscal responsibility, debt reduction, and curbing spending, but no longer seem to care. It’s time for me to stop obsessing about the national debt, unfunded liabilities, and GDP ratios.

Instead, let’s all embrace the debt. (Interest payments on it were $375 billion in 2019, accounting for 8% of the federal budget; the Debt Clock currently shows $383 billion in interest for 2020.)

Let’s encourage our leaders to spend like there is no tomorrow during this crisis and beyond. Let’s enjoy any free money or stuff the government gives us, and “feel the burn.”

Chief Justice Roberts joins liberals in 5-4 ruling against churches
Next Post
AUDIO: Is mail-in voting a necessity for November? We asked an epidemiologist