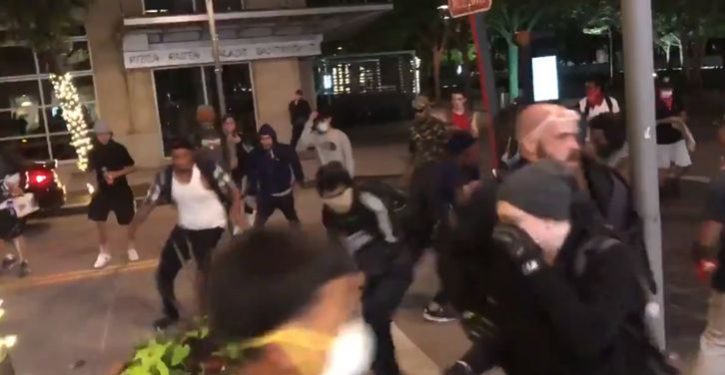 The details are sketchy, but according to CBS Dallas/Ft. Worth, a man was beaten last night by what appears to be around a dozen people in the Victory Park area of Dallas. The unidentified man, who is the hospital where his condition is described as “stable,” was reportedly defending either his neighborhood or his business from angry rioters.

TheBlaze’s Elijah Schaffer, who was on the scene and recorded the video, writes on Twitter:

Man critically injured at Dallas riots. It appears he attempted to defend a shop with a large sword. Looters ran at him, then he charged rioters. They then beat him with a skateboard and stoned him with medium sized rocks. I called an Ambulance and it’s on the way.

CBS maintains that the man was wielding a machete and confronted the protesters, who proceeded to punch and kick him, even after he lay motionless on the pavement. In one of the videos, one person can be held repeatedly exclaiming, “Oh, sh*t!” and “Oh, my God!” as though he was fearful the man was dead.

Full unedited video for editorial requests. Please attribute to Elijah Schaffer of Blaze TV. I cannot confirm he was the store owner, but I pulled out my camera when I saw him appearing to defend a store, then he was rushed, then made the move that might have cost him his life pic.twitter.com/8oGa2obBbp

According to CBS, “police are continuing to investigate the incident and did not immediately release further information,” though the article notes that “as of 10:45 p.m. Saturday, police said there were at least 74 arrests made and that those arrested would be charged with inciting a riot.”

Heavy.com includes a statement made by Carlos Almeida, a Dallas police spokesman, who said:

We are trying to obtain information, but have very little at this time. The victim was transported away before officers arrived. The call came in as a stabbing call at the House of Blues. I just learned he is in stable condition.

The victim went to the 2200 block of N. Lamar Street (House of Blues) carrying a machete to allegedly protect his neighborhood from protesters. The victim confronted protesters while holding the machete and was subsequently assaulted by the protesters. He was transported to an area hospital where he remains in stable condition. This remains an ongoing investigation.