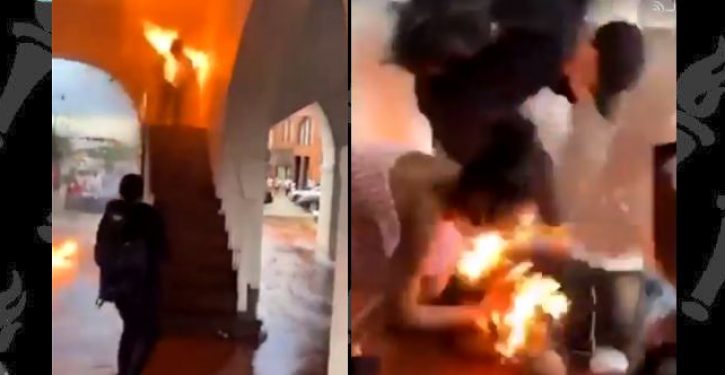 Young children are taught that it is dangerous to play with matches. Maybe it’s time this lesson was extended to older children at well.

According to CBS affiliate WNCN protesters over the death of George Floyd broke into the Market House, an historical building in Fayetteville, N.C. that dates to 1832, and set fire to the ancient structure. They also burned an American flag.

The video below shows protesters standing outside the now-smoking building chanting,”Black Lives Matter.”

The Market House in downtown Fayetteville is on fire. Protestors have shattered the windows and are chanting,”Black Lives Matter.” pic.twitter.com/7vUGPrPKnB

As the building began to burn in earnest, one of the arsonists, still inside, attempted to accelerate the destruction by picking up a piece of burning debris and hurling it, presumably into an unlit area. Instead, the flames engulfed him.

In the video below, you can see the man, a human, torch hurtling down a flight of stairs, shouting, “Oh, sh*t! Oh, sh*t!”

When he reaches the bottom, he falls or is taken to the ground by fellow protesters, who try to extinguish the flames.

There is no word yet on the man’s condition.

Why America can’t return to ‘normal’
Next Post
America under attack: The page is turning 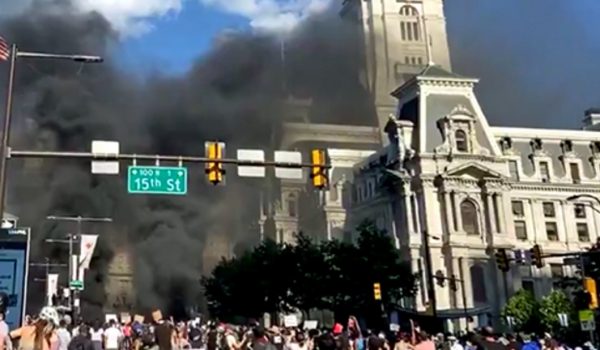