Kerri Kupec, the Justice Department spokeswoman, said on Fox News that Barr appointed John Bash, the U.S. attorney for the Western District of Texas, to conduct the review.

Bash will carry out the probe in coordination with U.S. attorneys John Durham and Jeff Jensen, who are looking into various aspects of the Trump-Russia investigation.

On May 13, Republican senators released a list of 39 Obama-era government officials who submitted requests for intelligence reports during the presidential transition period that identified Flynn, the incoming national security adviser.

Kupec said that while the process of unmasking is not “inherently” wrong, Barr is analyzing whether Obama officials had political motives in submitting requests for reports that identified Flynn.

“The motivation and the reasoning behind unmasking can be problematic,” she said.

“When you are looking at unmasking as part of a broader investigation like John Durham’s investigation, looking specifically at who was unmasking whom can add a lot to our understanding about motivation and big picture events.”

Kupec said that Bash will be “looking specifically at episodes both before and after the election.”

“The frequency, who was unmasking whom, all of the circumstances and events can shed light and give us a better understanding of what happened with respect to President [Donald] Trump,” Kupec said.

On May 20, Sens. Chuck Grassley and Ron Johnson requested records for unmasking requests submitted for any Trump associates from between January 2016 and January 2017.

The Republicans said in a letter to Richard Grenell, the now-former acting director of national intelligence, that they were “increasingly concerned” that the FBI began surveillance against Trump associates before the bureau officially launched its counterintelligence investigation against Trump’s campaign on July 31, 2016. 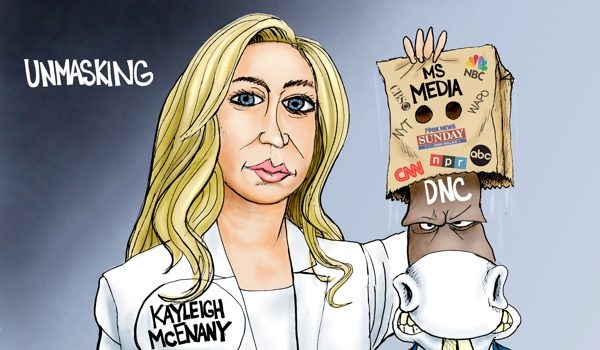 Cartoon of the Day: Unmasking
Next Post
CNN anchor loses it on air: ‘As a white woman, aware of my own privilege, I am so angry’