“To hear left-of-center opinion-makers tell it, the model of good governance in the pandemic has been set by New York Gov. Andrew Cuomo,” writes Noah Rothman at Commentary. He adds:

The Empire State governor regularly ranks at the top of lists … of executives managing the plague and its fallout. Cuomo’s daily performance before the cameras has been so well-received that it’s contributed to speculation about the governor (somehow) replacing Joe Biden at the top of the Democrats’ presidential ticket in November. After all, “he’s doing what any president should do,” actor Robert de Niro told The Late Show host Stephen Colbert.

That includes eschewing Donald Trump’s xenophobic habit (according to the Left) of referring to COVID-19 as the “Chinese virus,” much to the chagrin of media. To drive home the point, many outlets have assigned reporters with Asian (preferably Chinese) surnames to cover the scandal. Here is NBC News’s Kimmy Yam:

Many officials, including the head of the Centers for Disease Control and Prevention, have criticized the phrase as inaccurate and potentially harmful in promoting racist associations between the virus and those from China.

Never mind that plenty of news outlets have dubbed it the “Wuhan virus,” which is no less execrable since it names the city in China where the disease is believed to have originated.

Anyway, enter future Pres. Andrew Cuomo to set the record straight. At one of his daily ad hoc news briefings, the governor referred to the coronavirus as the “European virus.” Take that, Trump!

A transcript of the comments follows the video.

We were really at a very, very bad place. Again, through no fault of our own. Virus came from Europe. Whoever would have figured that? Somebody should have, but above my pay grade. We changed the trajectory dramatically by what we did. And that was smart. But we have to stay smart and we have to stay united. You look at what we have done. New York, the cases are now on a decline. You look at the rest of the nation outside of New York, the cases are still on the incline. We took the worst situation in the nation and changed the trajectory so now we are on a decline. The rest of the nation, the cases are still on the incline. That’s because of what the people in this state did. If you had said, when we started this, ‘Yes, we had more cases than anyone else. Yes, we had this European virus attacked us and nobody expected it. But we are not going to change our trajectory. We are going to change the trajectory more dramatically than any place else in the nation.’ And when you look at the nation compared to New York, you will see us on the decline and the rest of the nation on the incline. People would have said it’s impossible, but we did it. But we have to stay smart. [Emphasis]

As William Davis of the Daily Caller notes, “The New York Times reported in April that most coronavirus cases that were brought to New York from overseas were from Europe.” That may well be the case, but since the first confirmed cases of the virus were reported in China, the term “European virus” is really inaccurate.

Besides which, aren’t Democrats worried about injuring the fragile sensibilities of our European allies by falsely pinning the responsibility for opening this Pandora’s box on them? 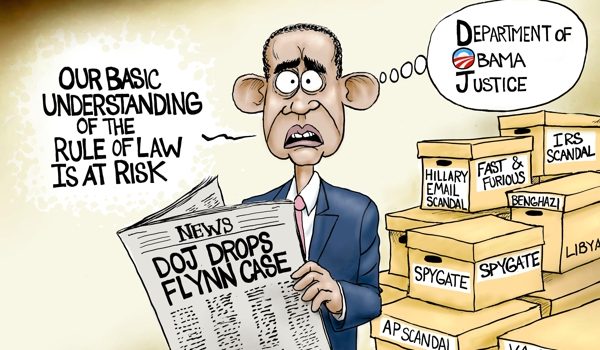 Cartoon of the Day: Obamagate
Next Post
Grim reminder: Pelosi would be president if Trump, Pence become incapacitated by COVID-19