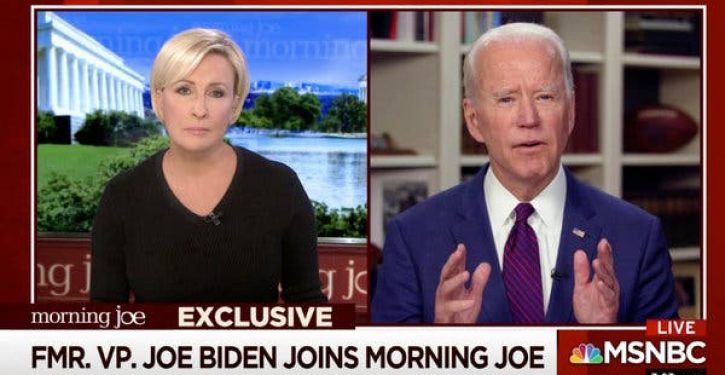 While the campaign of presumptive Democratic presidential nominee Joe Biden has challenged journalists to dig into his past and “rigorously vet” the allegations of former staffer Tara Reade, the candidate is making it impossible to for them to meet that challenge.

Reade alleges that Biden, while serving in the Senate, pinned her against a wall, reached under her skirt, and penetrated her with his finger. She filed a complaint with the Senate, but the alleged assault occurred in 1993, when such records weren’t required to be retained in perpetuity.

There is, however, a fairly decent chance that Biden’s Senate archives may include a copy of that complaint. And if not the complaint, there may be notes, according to Reade.

Biden’s Senate Chief of Staff “Ted Kaufman took notes when I spoke with him,” Reade told Business Insider. “He’s now denying that we ever had the meeting, and I watched him take notes. Those notes would be in my personnel file, along with sick days or any kind of extra notes that I turn in.”

But the archives — 1,875 boxes of them covering nearly four decades in the Senate — are locked under seal at the University of Delaware, and Biden won’t allow them to be released, at least throughout the year 2020.

The Washington Post questioned his refusal to release the records last year, and Reade’s allegations since then have added some urgency to the request.

But Biden has a plan. Instead of opening the archives to the press, his campaign sent operatives to rifle through the records — and if support for Reade’s claims exists, they’ll no doubt make sure they never see the light of day.

Ironically Biden tweeted Thursday, “An open and independent press is more important than ever in times like this.”

“Open and independent” to Biden must mean “Treat them like mushrooms — kept in the dark and fed horse manure.”

The Biden campaign released a written statement Friday morning strongly denying that the event ever occurred.

“While the details of these allegations of sexual harassment and sexual assault are complicated, two things are not complicated,” the statement said. “One is that women deserve to be treated with dignity and respect, and when they step forward they should be heard, not silenced. The second is that their stories should be subject to appropriate inquiry and scrutiny. Responsible news organizations should examine and evaluate the full and growing record of inconsistencies in her story, which has changed repeatedly in both small and big ways.”

After more than a month of TV interviews during which the Reade allegations were completely ignored, Biden appeared on MSNBC’s “Morning Joe” Friday where by prearrangement he addressed the charges to co-host Mika Brzezinski.

But if Biden thought he was going to get a softball interview, he was sadly mistaken.

But that wasn’t his statement two years ago. Biden said during the proceedings, “For a woman to come forward in the glaring lights of focus, nationally, you’ve got to start off with the presumption that at least the essence of what she’s talking about is real, whether or not she forgets facts.”

When Brzezinski pressed him on his refusal to release records of all complaints made against him, Biden claimed, “I’m prepared to do that. To the best of my knowledge there have been no complaints against me in terms of my Senate career.”