Tom Homan, the former acting director of Immigration and Customs Enforcement (ICE), predicted a dire situation at the U.S.-Mexico border if former Vice President Joe Biden emerges victorious in the November elections in an interview with the Daily Caller News Foundation.

If Biden is elected president and follows through on many of the campaign promises he has made, there will be a return to “chaos” at the southern border, including more drugs smuggled to the United States, more rapes of migrant women and ultimately more deaths, Homan said.

“It’s going to be chaos,” the former ICE chief told the DCNF when asked about a possible Biden victory.

Homan pointed to the sharp reduction in illegal immigration in the past months under the Trump administration, a consequence, he said, that is directly attributable to the actions taken by the president.

“For those who hate Trump, they need to think about this: How many women did not get raped because of what the president has done?” Homan asked.

Homan, who directed ICE between January 2017 and June 2018, said illegal immigration has dropped 80% under the Trump administration and compared that to a Doctors Without Borders report that said 30% of migrant women are raped on their journey to the United States.

What is making the former ICE chief so concerned about a Biden presidency? Homan pointed to the former vice president’s own campaign platform and pledges.

Biden unveiled his immigration agenda in December 2019, which called for a massive rollback of President Donald Trump’s accomplishments — such as a dismantling of the Remain in Mexico program, a reinstatement of Deferred Action for Childhood Arrivals (DACA), and the abolition of for-profit prisons.

A little over two months later, Biden — under pressure from the progressive bloc of the Democratic Party — vowed to place a moratorium on all deportations during his first 100 days in office, with convicted felons being the only exception.

“What kind of message does that send to the rest of the world?” Homan asked.

Such rhetoric from a leader would only bring more illegal immigration into the United States, he added.

As a result, he said, the drug cartels that charge migrants to be smuggled will make more money, a higher number of migrant children who attempt to cross the border will die, and the federal government will once again lose control of the southern border.

“When you say we shouldn’t be removing illegal aliens unless they commit a felony, you’re inviting every illegal alien into our country because they know there are no consequences to entering the country illegally anymore so long as they don’t get arrested for a felony,” he continued.

The longtime federal immigration official compared these proposals to Biden’s past comments about Trump, particularly over comments about the rule of law.

“If he becomes president, we lose the border,” he said.

The Obama administration is a key window into what a Biden presidency would look like, he said. In particular, the former ICE chief said that the rush of migrant families that appeared at the U.S.-Mexico border in fiscal year 2013 was no random event but a direct consequence of then-President Barack Obama deciding to unilaterally enact DACA in 2012.

Homan certainly speaks from a position of experience.

He served as a police officer in New York in the 1980s joining what was then called the Immigration and Naturalization Service — the agency was transformed following the Sept. 11 terrorist attacks. Homan also served as a Border Patrol agent, and was later appointed by Obama to be executive associate director of ICE in 2013.

He is out with a book “Defend the Border and Save Lives: Solving Our Most Important Humanitarian and Security Crisis,” which dives into the need for protecting the country’s borders.

These criticisms of Biden are a far cry from how he feels about Trump — a president he said is unlike any other he has worked with since the Reagan administration.

The former ICE chief, who is happy with the current occupant of the White House, is worried that if Trump loses, much of the progress made during his administration will be undone.

“Every American should be afraid of what’s going to happen to our border if Joe Biden becomes president.” 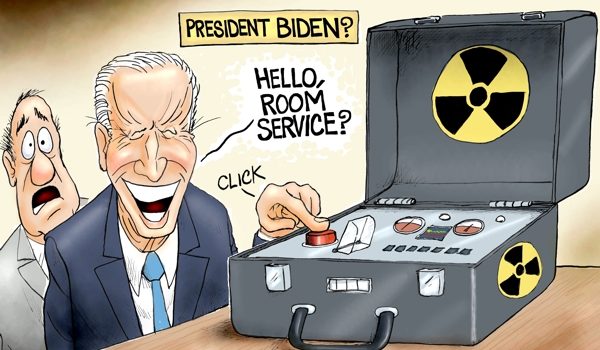